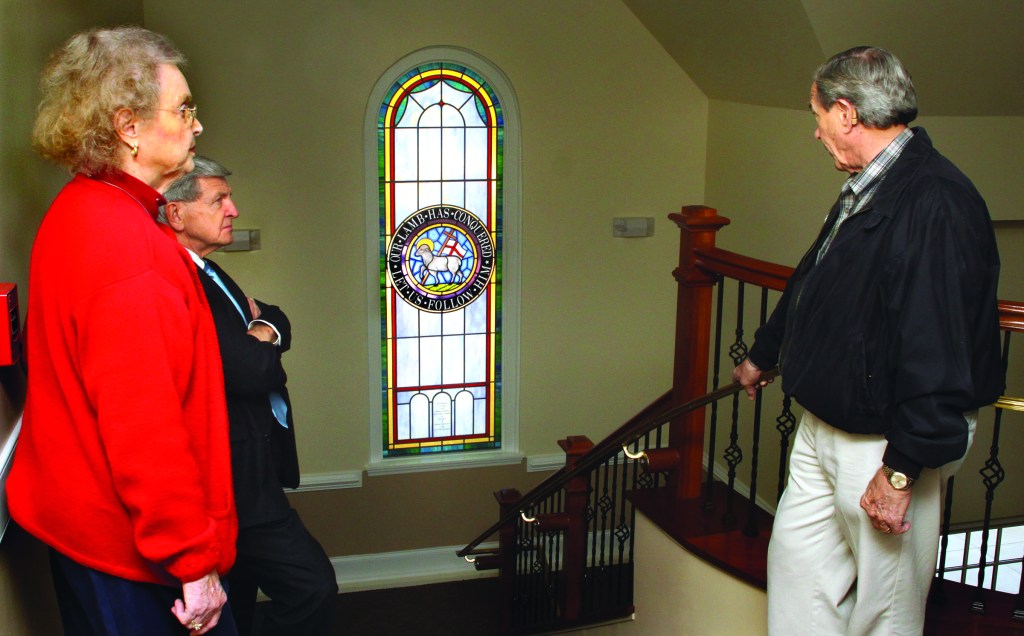 By Dwight Sparks
The Clemmons Courier

In an act of diplomacy befitting the United Nations, Clemmons Moravian Church threw open its doors Monday again to the Clemmons Historical Society to calm any lingering storms from its building project.
Some society members had lamented the demolition of the original section of the church last year, more than 100 years old, that had been the first school in the village.
Church leaders had puzzled over the project for a decade before agreeing to a new construction between two wings that now blends so smartly that it’s nearly impossible for an untrained eye to distinquish the old from the new.
Church member Charlie Quinn led the tour. “The old building wasn’t air conditioned and barely heated. We feel we’re uptown now,” he said.
The new structure has an elevator, allowing members to join the choir now who hadn’t been able to negotiate two flights of stairs — 37 steps — in the old building.
The choir loft was where Martha and Dodd Linker met in 1963. She was a young soprano and agreed to help with the cantata. Dodd, now deceased, sang bass. She still sings in the choir 37 years later.
About 30 members of the society toured the church, getting an eye at the new 20-gallon coffee maker for the church lovefeasts. The congregation cancelled the Christmas lovefeast last year because of construction. Quinn promised the lovefeast will be well supplied with coffee this Christmas.
Mayor John Bost was among those touring the church. Historical Society president Janet Banzhof made him an honorary member of the society.
“Honey, we’re happy to have you,” Banzhof said.
“I’m glad to be called ‘Honey,’” the mayor riposted.
The historical society last toured the church immediately before demolition of the old school began.