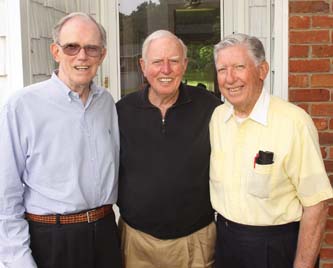 By Ann Sheek
The Clemmons Courier

The Flight of Honor to Washington this week was somewhat unique, with three  of the World War II veterans on board being brothers. They are the Jackson brothers: Henry “Red”, 86 of Lewisville; Wesley, 85 of Winston-Salem and Gray, 84 of East Bend.
The Jackson brothers grew up near Smith Reynolds Airport, and graduated from Mineral Springs High School and Draughn’s Business College. Their Dad ran a grocery store near their home, and the boys grew up “helping in the store, when they were big enough to reach the shelves.” When World War II began and the United States entered, patriotism was strong for the Jackson brothers.
Red Jackson was drafted into the Army/Air Force. “There wasn’t a separate Air Force during the war, so I asked to be assigned to the Air Force part. I wanted to be a statistics mechanic,” said Red. “I was sent to school in Goldsboro, then to cadet training in Knoxville, Tennessee for the 1st flight training a the University of Tennessee. Then to Birmingham, Alabama, but most of my training was in South Carolina and Georgia.”
After graduation, Red Jackson was commissioned, and flew B-25s and trained French cadets to fly. He said “I asked for overseas duty, but was never sent over. I served 33 months before the war ended, then served in the Air Corps Reserve for 10 years.”
After the war, Red worked for Hanes Hosiery and wanted to fly the company plane, but that did not happen, so he left Hanes in 1949 and went to work for Cahill-Swain Mens Clothing store until he retired. He lived in Winston-Salem 37 years and lives in Lewisville now with his wife Vicki.
Wesley Jackson, the second brother, graduated from Draughn’s Business College, and volunteered for the Army/Air Force on his 18th birthday. “I wanted to fly, but had some problems with my depth perception, and ended up as a clerk typist. My basic training was at Miami Beach, where the Army had took over several hotels there for barracks. We had real nice accommodations, but were not allowed to use the elevators, but had to use the stairs.”
Wesley said “I started out in the 3rd Air Force and spent time in Shreveport, Louisiana, then was sent to the 2nd Air Force in Colorado Springs, Colorado. At Draughn’s School, I took shorthand, typing and bookkeeping. That shorthand helped out in my work. I was assigned to a Colonel in the Inspector General’s office, and we flew around the country a lot, taking depositions in shorthand. I sent this back to the home base to be transcribed.”  Wesley served 28 months before the war ended.  He lives in Winston-Salem.
The baby of the Jackson family, Gray, is 84, and chose to join the U.S. Navy. “I volunteered one month before my 18th birthday, and wanted to be a pilot. We grew up near the Smith Reynolds Airport, and we brothers were interested in flying. I didn’t become a pilot, but was trained to be an aerial gunner.”
Gray’s training included boot camp in Memphis, Tennessee; then to Norman, Oklahoma; Lake City, Florida; Pensacola, Florida and finally in Atchison, Kansas. “Before I could be assigned to duty, the war was over and I had been in service 19 months. I was sent to Norfolk, Virginia, where I was discharged.” Gray worked for Consumer Credit Corporation until his retirement. He lives near East Bend with his wife, Nancy Lutz Jackson, and they are members of Unity Moravian Church in Lewisville.
The Jackson brothers shared their memories of their mother. Gray said “She would write a letter to each of us  on six nights a week, all the time we were in service. She did not write on Saturday night.” The brothers said their mother was apprehensive about the possibility of her sons being in the war, and was grateful that they did not have to go into battle overseas.
Red Jackson said “we would send part of our money home to Mom to save. She kept a little notebook in which she recorded the amount each of us sent home. I used my money in 1946 to buy a beautiful 1942 Pontiac.”
Wesley said “Well, I sent money home each payday, but most of the time, in two weeks I would write home for Mom to send it back to me.”
The Jackson brothers’ mother died at age 51 in 1949. They have a sister, Geraldine Jones, who was the eldest in the family. Gray said, “Our mother was an admirable woman. She had four children in four years, and that meant a lot of hard work.”
On the Flight of Honor this week, James Matthews of East Bend, is their chaperone. “This is the second time I have been involved on a Flight of Honor to Washington. My own Dad, Junior Matthews, went recently, and I volunteered to be his chaperone, but family members cannot do this, so I took a separate flight and joined him in DC for the monument tour.”
When Red Jackson was asked if he wanted to go on the trip, he said no, but his wife Vicki suggested he ask his brothers if they would go. When Wesley and Gray said yes, that suited Red just fine, and he was then eager to go.Gray has seen the monument, but this will be the first time Red and Wesley have seen the World War II monument.
In their pre-flight meeting, the Jacksons learned they will be the second group of veteran brothers that have gone on the Flight of Honors from the Triad.  There will be 102 veterans on this week’s flight. On this flight, the oldest veteran is a woman, who is 94 years old, and the youngest veteran is 81. To date, there have been 10 Flight of Honors from the Triad.
Vicki Jackson said the cost of a Flight of Honor is $50,000 or $500 per veteran. The Flights are paid for with donations from businesses, churches, schools, clubs and individuals.