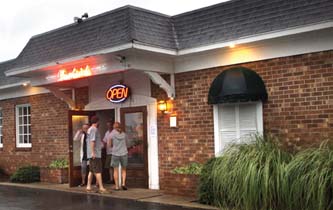 By Jim Buice
The Clemmons Courier

For nearly three decades, Dockside Seafood has been a fixture in Clemmons. That came to an end Sunday night when the longtime fish place shut its doors.
However, there’s a happy ending to this story. The restaurant started a three-month process on Monday where it will be revamped and remodeled.
Owner Teddy Gallins said it will reopen with a new look and a new menu.
“We’re just going with the times,” Gallins said. “A transition was needed.”
There also will be a new name: 2520 O’so Tavern (the restaurant’s address is 2520 Lewisville-Clemmons Road). Steaks and pasta dishes will highlight the offerings, but the food that made this spot a tradition for many families in the area for 29 years isn’t going away.
“The customers want more,” said Helen Gallins, Teddy’s wife, as the final customers paid their bills on the last night of business. “They want a bar. They want more variety. We’re still going to keep our Dockside seafood as a small part of the menu. We’re just going to have a lot more.”
The restaurant will partner with the O’so Restaurant Group, which already operates O’so Eats on Jonestown Road in Winston-Salem and another food establishment in High Point.
“Teddy’s cousin Sammy is a culinary chef, and he’s going to come in here and do his thing,” Helen Gallins said.
The new-look restaurant will be open for both lunch and dinner. Teddy Gallins said Dockside had about 20 to 25 employees, most of whom were part-time workers. They will be able to reapply when the doors open this fall, and more spots will be available with two work shifts.
He said the pending change has been in the works for some time but added the passing of John Gallins, his older brother and partner, last October was especially difficult.
“It was a major blow,’” Teddy Gallins said. “From Day One, it was my dad, me and John.”
Dockside thrived in the 1980s and 1990s, but Teddy Gallins said things haven’t been the same since 9-11. And like most restaurants, the economic woes of the past few years have further impacted the business. He established Aug. 1 as the date the restaurant would cease to be Dockside.
“This last week it started to hit home,” Teddy Gallins said. “You’re excited, but you’re sad, too. It’s been very emotional.”
Many customers shared that sentiment.
“They’re very upset with us,” Helen Gallins said. “They’re devastated. They just want to make sure the family that owns it is still going to be here. We’ve had a lot of loyal customers over the years.”
Actually, they’ve seen families grow up over the years.
“We had this one family that would come in, and the little boys came in in baby seats,” Helen Gallins said. “As they grew, there was a place in the back where I would mark with a pencil how tall they got. Every time he would come in, we’d mark that wall.
So, they came in Friday night, and I took a old big magic marker, and one of the boys was like 6-2. He’s in college now, so he’s got to be 19 of 20.”
Family has always been a big part of the business on the employee side as well.
Paul Gallins, the son of Teddy and Helen Gallins and the “heir apparent,” was checking on tables Sunday night to make sure some of the big parties were doing OK. Daughter Maria works at O’sos.
Dawn Hanson, a cashier who has worked at Dockside for about 20 years, used to babysit for Paul and Maria when they were little.
“I love them,” Hanson, who plans to reapply for her job at the new restaurant, said of Teddy and Helen Gallins. “They’re like family to me.”
Her parents were there eating on the last night. Her dad, Von Shelton of Mocksville, was polishing off some whitefish.
“I think it’s the best whitefish I’ve had here,” said Shelton, who also is partial to the popcorn shrimp, the restaurant’s best all-time seller. “Everything is good here. We’ve been coming here since they’ve been here. But they’re going to reopen. It’s going to be OK.”
Teddy Gallins said he heard lots of positive words in Dockside’s final days.
“These past three or four days, the feedback has been awesome,” he said. “People are asking what are we going to do and where are we going to go? They told us how much they enjoyed the food. It makes you feel good. That was Heaven sent.
“But come tomorrow morning, I’ll be right here. We have a lot of plans to make.”