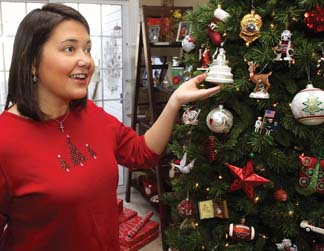 “She just seems to be able to do what she wants to do. She makes up her mind that she can do it, and she does. She is the most positive person that you’ll ever meet.”
— Wilma King, grandmother, on Brooke Barbour Childress

By Jim Buice
The Clemmons Courier

Opening the last present on Christmas Eve is an annual tradition for Brooke Barbour Childress when the family gathers at her grandparents’ house.
“That’s what she has always done since the time she was a baby,” said her grandmother, Wilma King. “She always has to open the last gift.”
But Christmas Eve 2010 was like no other.
Earlier that day, Jared Childress came over to visit with King and tell her of his plan to propose to Brooke that night. His mom, who works at Salem Creek in Winston-Salem, had bought him a small wedding cake ornament, and he then tied the ring to it.
“Jared had decided he wanted to propose in front of her family on Christmas Eve, and she didn’t know anything about it,” King said, “He gave me the ornament, and I said, ‘OK, Jared, what we’ll do is put it on the back of the tree.’ So when she opens the last gift, she’ll think everything is over, and then I’ll say, ‘Wait a minute, Jared, I had bought her an ornament, and it’s on the back of the tree. Would you mind going and getting it?’
“He walked over there and got it, and he came back over and handed it to her. She was closing her eyes, and when she opened her eyes, she didn’t quite know what to think about it. She turned it around, and she saw that ring. He went down on his knee and said to Brooke, ‘You’ve made me the happiest that I’ve ever been, and I want to spend the rest of my life with you, and will you marry me?’ Of course, there wasn’t a dry eye in the house. We were all crying. We love Jared because he included us in such an important occasion.”
They were married on Sept. 17, 2011.
It was a dream come true for Brooke, 30, who met her future husband when he came to her Clemmons townhouse earlier in 2010 to install a digital cable box.
“I believe in God,” Brooke said. “I just prayed. I didn’t actually pray for a boyfriend. I just prayed that God would send someone in my life for a husband. I just didn’t think God would bring someone to my front doorstep.”

Oct. 11, 1996, seemed like any other day for 15-year-old Brooke Barbour, a sophomore at West. It was a Friday, and she and her boyfriend at the time, along with her best friend, were headed to a birthday party. Later, the plan was to go to West’s football game that night.
They never made it. On the way to the birthday party, they were involved in a single-car accident on Lasater Road. Paul Van Hulle, 16, was not injured, but Brooke’s best friend, Elizabeth Windsor, 15, was killed instantly when the 1990 Honda that Van Hulle was driving went off the road and landed on its side against a tree. Brooke was seriously injured, suffering a traumatic brain injury.
She was in a coma for 11 days and then in the intensive-care unit for about a month at Forsyth Medical Center. That was followed by two months of therapy and then a long time of rehabilitation.
Brooke doesn’t remember anything about the wreck or much of anything else afterward, except for one thing.
“One of my most vivid memories was when they told me Elizabeth was dead,” Brooke said. “I was devastated.”
Certainly, it was a life-changing event in so many ways. Her family is just thankful that she survived.
“She started waking up gradually,” King recalled. “It took her a while before she could even open her eyes. You don’t know what’s happening because you’ve never had any kind of experience like it. You ask the doctors, and they’re being guarded. Each head injury is totally different. They started working with her, even when she was in a coma. They had to get her started because the sooner you do, the better chances of her coming back.
“When she finally woke up, she couldn’t talk. She couldn’t walk. She couldn’t do anything. Everything had to be learned over.”
Along with the closed head injury, the right side of her body was affected.
“After I learned to walk and put weight on my leg, it got better a lot quicker than my arm,” said Brooke, who still walks with a limp and had to learn to be left-handed. “I still don’t have full use of my right arm.”
Brooke’s long struggle to recover meant she had to repeat her sophomore year at West.
“When she first went back, we were thinking she would have to go in a wheelchair,” King said. “Brooke didn’t want to go in a wheelchair. She had a tutor and aide to help her and go to class with her and help with her books. That helped keep her organized. With the left hand, she couldn’t write as quickly as she needed to.”
She was determined to graduate from high school, even though it was a year later with the Class of 2000, and go to Meredith College in Raleigh.
“I always had planned to N.C. State, where my dad went, but after the wreck, even after I learned to walk, I still can’t walk long distances,” said Brooke, who can’t drive. “It’s better now but still not perfect. State is a huge campus. My grandmom and mom were wanting me to go to Salem College. I thought that was too small and too close to home. Part of the college experience is getting out there and being on your own and not relying on the family.
“The real reason I went to Meredith is that it was near State. I loved Meredith. It was the perfect place for me.”
They loved her, too.
“It was amazing,” King said. “She walked the campus. She became a pet down there. If it was raining or something, the maintenance guys would pick her up in a golf cart and take her where she needed to go. Her mother helped her a lot. It was an amazing thing that she could do it at all.”
Again, Brooke persevered, graduating from Meredith in 5˝ years.
“She just seems to be able to do what she wants to do,” King said. “She makes up her mind that she can do it, and she does. She is the most positive person that you’ll ever meet.”
Brooke earned her degree in human environmental sciences. “That’s a fancy way of saying working with people,” she said.
Being around people is what Brooke is all about.
“She is the sweetest and most outgoing person,” said King, who is obviously very close to her granddaughter. “Her husband’s dad said at the wedding, ‘If you’ve ever been to the mall or to a stadium, like up at Blacksburg, Va., all of the sudden you have 60,000 new best friends because Brooke talks to everybody.’ ”

Since college, she has settled back home. Brooke, who previously worked some at the Jerry Long YMCA in Clemmons, had been employed in a part-time position at The Oaks at Forsyth before being laid off earlier this year when the nursing home was bought out.
“I loved working there,” Brooke said. “I decided for the time being, that I would take some time off to plan for the wedding. I would love to do something with kids. I just can’t work a full day.”
Although fatigue is a factor for Brooke, she always seems to find a way. If you drive along Stadium Drive, you may see her walking to Kmart or the Grecian House.
“I don’t feel like I have any limitations, except I can’t drive,” Brooke said. “Some things aren’t as easy for me, but I’ve kind of learned to do things. I have so many great family members and friends.”
She is the daughter of Kim and Tripp Russell, who is her stepfather, of Clemmons. Ronnie Barbour, who lives in Rocky Mount, is her father. She has three half-brothers and one half-sister.
Now she has a new husband … and a new life.
What about this Christmas? This year, Jared and Brooke Childress will spend Friday at her grandparents’ house in Winston-Salem, instead of the usual Christmas Eve time slot. That’s because the newlyweds will travel to Alta Vista, Va., to spend Christmas Eve with Jared’s family before coming home on Sunday for their first Christmas together.
“When she got married in September, it was such a feel good thing for all of us,” King said. “It had always been her dream that she wanted to get married. She wanted to have a home and a family. We’re just all so happy for her.”