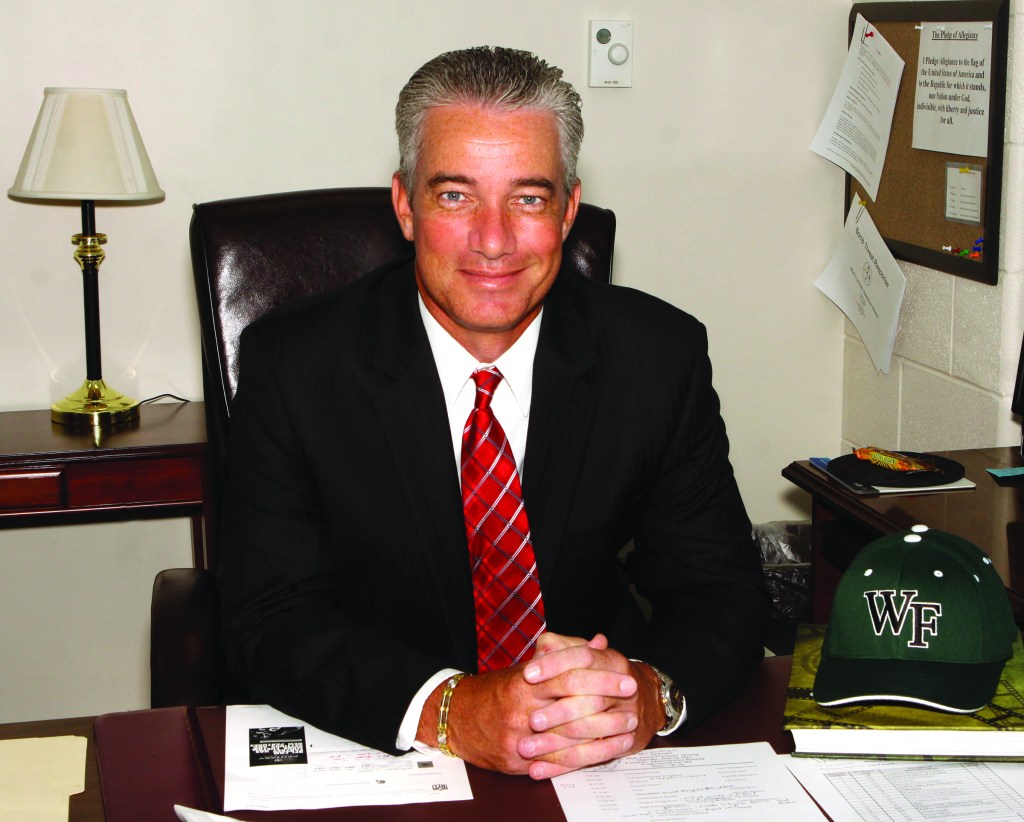 When Charles McAninch takes over as the new principal at West Forsyth High School, he admits his biggest goal is to maintain the school’s rich tradition.
“My challenge is continuing what has been established there and then improving upon it,” said McAninch, who was comes to West after serving as the principal at nearby Meadowbrook Middle School in Winston-Salem since 2009.
He replaces Kurt Telford, who retired from public education at the end of the 2011-12 school after 11 years at West to take over as principal of Our Lady of Grace School in Greensboro.
“Those are very large shoes to fill with Mr. Telford,” McAninch said.
He talked about how Telford tried to get know each of his nearly 2,000 students by name. McAninch, 44, said he always took pride in learning the names of his students at Meadowbrook.
“The main thing is just getting to know the kids,” he said. “Because ultimately if the kids feel connected with the school, they’re going to be successful. My biggest concern right now in such a short period of time with the junior and senior class is getting to know them.”
McAninch was unanimously selected by the Winston-Salem/Forsyth County Board of Education last Wednesday to move a few miles up the road from Meadowbrook, where his daughter, Abby, is a rising eighth-grader, to West.
“Eventually in my career, I wanted to return to high school,” he said.
Before coming back to the Winston-Salem/Forsyth County Schools more than three years ago, he served as principal at West Stokes High School from 2005 to 2009. He was principal at Meadowbrook Alternate School from 2003 to 2005.
McAninch also held positions as an assistant principal at West Stokes High and as a language arts teacher at Northwest Middle School in Winston-Salem and Hertford County Middle School.
For McAninch, his philosophy is simple.
“Ultimately, it’s to make sure that students have the best experience they can at whatever grade level,” he said. “For me, that’s primarily been middle school and high school. As for education, the biggest thing we’re facing now is the new core curriculum. The state has obviously raised the bar again.”
During his time as the principal at Meadowbrook Middle, the school ranked as the No. 1 school in the district the last two years while outfitting classrooms with 21st century technology systems. But he is also proud of other accomplishments.
“Our students have more opportunities to participate in extracurricular activities,” McAninch said. “We have increased the opportunity for students to become connected to our school not only through the traditional avenues such as athletics and fine arts, but also have increased the total number of clubs and activities such as Drama, Peer Mediation, Rachel’s Challenge, History Club and Robotics.”
At West Stokes, when he was the principal the school implemented a program to help ease the transition from middle school to high school. Also, through assistance in the community, more than $150,000 was raised to light the baseball and practice fields as well as the tennis courts.
McAninch was born just outside of Buffalo, N.Y., but was raised in Pittsburgh. He earned a bachelor’s degree in secondary education from Kent State University and a master’s degree from the University of North Carolina at Greensboro in school administration.
His wife, Tracy, is curriculum and testing coordinator at Northwest Middle School. In addition to Abby, they have another daughter, Taylor, who is a rising sophomore at Appalachian State. They reside in Pfafftown.
In his spare time, McAninch enjoys playing golf and pulling for the Pittsburgh Steelers and Pittsburgh Penguins.
He has spoken with Telford since his appointment and is now planning things out to make it “as seamless a transition as possible.”
His start date at West is Aug. 1.