The bride is the daughter of Linda W. Long of Chapel Hill and Henry T. Long of Atlanta, GA. Her grandparents are Mr. and Mrs. Cyril C. Waters of Roanoke Rapids.

The bride is a graduate of UNC-Greensboro with a Bachelor

The groom is a graduate of UNC-Greensboro with a Bachelor

of Arts in Communication. He is currently employed with Northwood Ravin as a Leasing Professional.

The best man was William Henry Brookshire, IV of Clemmons.

The groomsmen were Christopher Lee Benton of King, Michael Emery Bolick of Greensboro and Leonard Darlington

Long II of Chapel Hill,. The ring bearers were Benjamin Boyd Waters of Oxford and Hunter Harrison Story of Mebane.

The reception was held at the Sarah P. Duke Gardens Hall with music performed by the Shakedown Band of Raleigh.

The couple plan to honeymoon this December in Antigua and will reside in Carborro. 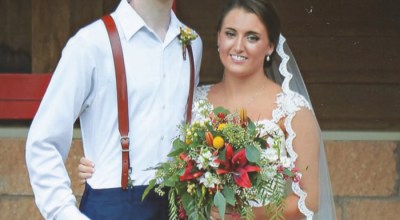