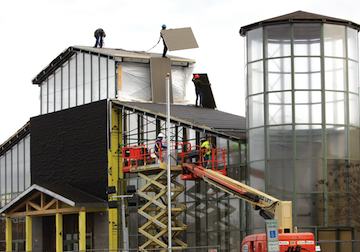 After all, the company’s headquarters is just a few miles away in Winston-Salem off of Healy Drive.

But it’s more than just that for the retail grocer. Not only did Lowes hire an outside consultant to find out what the community was looking for in a grocery store, Kate Allred, the store manager, also went out on a fact-finding mission.

“In this past year, I just got in the car and drove around shaking hands and getting to know everybody and find out what they wanted,” Allred said. “I met a lot of farmers. We probably have more local products than anybody around.”

The result is a modern, updated look for this Lowes, which is located on Lewisville-Clemmons Road in New Towne Shopping Center and was chosen to be a model for other stores in the chain. A “soft opening” was held on Nov. 13, but the grand opening, featuring the new façade, is scheduled for Wednesday, Jan. 8.

It’s not just about having offerings from local companies such as Mrs. Hanes’ Moravian Cookies in Clemmons, Cherries Café in Clemmons, Miss Jenny’s Pickles in Kernersville, Bixby Honey Farm in Advance and Three Sisters Artisan Bakery in Mocksville.

“This store is not only local with all these concepts, it’s the experience you have in this store with all of these hosts,” Allred said.

They call employees “hosts” and customers “guests” at Lowes, and that’s a big part of a new view of visiting a grocery store. Perhaps the best example can be found at the Chicken Kitchen where those wearing the Lowes uniforms do the chicken dance (under a chicken chandelier) whenever a new batch comes out of the oven.

Not far away is the Sausage

Works where a variety of local sausages are available.

There’s a big rivalry between the Chicken Kitchen and Sausage Works.

“They play it against each other,” Allred said with a laugh. “The Chicken Kitchen doesn’t like the Sausage Works professors.”

Another favorite area among the fresh food offerings is Pick & Prep where customers can ask for their fruits and vegetables to be cut, chopped, sliced, diced, minced or cubed for a minimal charge.

“It’s a service that chefs have in restaurants,” Allred said. “Now we have it for our guests.”

A new offering for craft beer lovers is scheduled to be ready for the Jan. 8 grand opening. The Beer Den will include taps for those who want to pour local beers in refillable growlers.

Other special offerings, referred to as discovery stands, include:

• Big Apple — where healthy products, such as gluten-free or organic, can be found.

• Big Dog Bone — for people who like to pamper their pets with new products and premium “treats and eats.”

The overall new look includes large icons throughout the 55,000-square-foot store that draw attention to the various displays. There is also a “community table” in the deli and produce area near the Chicken Kitchen and Sausage Works.

Allred said that it’s like “a dinner table for the store and its family of guests” where local chefs, farmers, small businesses and local wineries are on display. There is a monthly calendar noting what might be featured on a given day.

Adding another element to the local touch can be found in the checkout lanes, which are named after roads in Clemmons — such as Hampton Road, Stadium Drive, Ridgecrest Drive, Magnolia Road, Idols Road and Harper Road.

“We have guests that are getting ready to check out, and they say, ‘no, I want to go to Hampton Road,’ or wherever they might live,” Allred said.

Departments have names that can be identified with geographic locations, including the Blue Ridge Bakery, Piedmont Produce, Smoky Mountain Meats and the Clemmons Deli.

Allred said she has been overwhelmed with the positive feedback on all the changes.

Sisters Angela Davis and Pamela Davis are regulars at Lowes and recently paid a visit to the store to pick up a few items.

“I like the variety,” Pamela Davis said. “I like the layout. It’s better than before. It makes you want to spend more. There are certain things you can only find here.”

Angela Davis also noted the variety and how spacious the store is.

“Customer service is very important, and they do a good job,” Angela Davis. “And the fried chicken is great.”

Allred said she has nearly doubled her staff in the last year to 195 employees. She wouldn’t provide a price tag on all the renovations inside or the mammoth façade outside that workers are busy finishing.

This is the store’s second renovation in its 16 years but has been “a whole different undertaking,” according to Allred.

“It’s nice that we as company we can be as proud of this store as much as the guests that come in,” Allred said. “We’re a local company. A lot of people don’t know that. Clemmons deserves a quality store of this nature.”