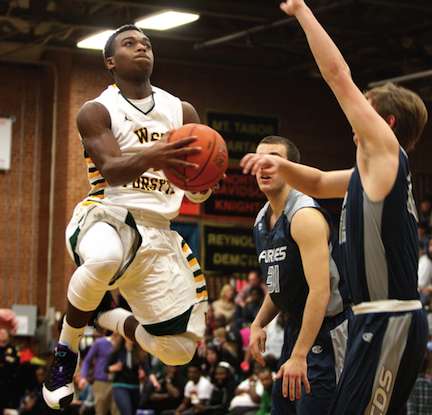 Searching to find their rhythm during the annual Frank Spencer Holiday Classic, the West Forsyth boys varsity basketball team went 1-2 overall but managed to walk away on a positive note — a 60-51 win over the Glenn Bobcats in final round play.

The Titans, currently 0-2 against CPC competition, have a chance to climb back into the conference race with a sweep of those two contests. Davie is currently 3-8 overall while Reagan is 6-5.

“We gained some valuable experience in the Spencer by playing against three very strong teams,” said West coach Mike Pennington. “We weren’t too pleased with the 1-2 outcome but we came out of it a much better team.

“The important thing now is to take what we’ve learned, build on it at practice and then come out ready to go when we play at Reagan next week. There is more parity in our league this year so a couple of wins could really turn things around.”

Competing in the eight-team “Championship” or top flight division, the Titans concluded Spencer play with a strong showing in the triumph over Glenn. The win came on the heels of a 68-60 loss to North Forsyth and a 77-63 loss to Forsyth Country Day.

“I also thought T.J. Goco and Jalen Dalton played well for us,” he noted. “And Avery Jackson was solid out front.”

In spite of the sub-.500 record, the Titans were effective on defense. They limited all three opponents to less than 40 percent shooting from the field.

“The key for us going forward is to do a better job offensively,” Pennington added. “That will be our focus in the gym this week.”