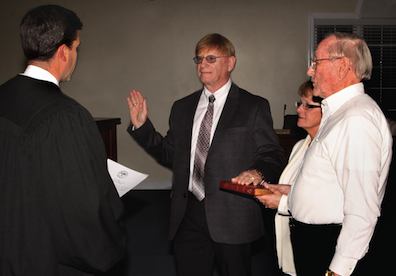 Continuing what has developed into a trend, the Clemmons Village Council once again promoted a member of the Planning Board to fill a vacant council seat when Darrell Roark was sworn in during Monday night’s meeting.

Roark, who was a unanimous selection to fill Mayor Nick Nelson’s position on the council in last Thursday night’s special meeting, took the oath of office in the first regular meeting of the new year.

“I’d like to thank the council for the vote of confidence in me,” said Roark, who has served on the Planning Board for more than a year and was previously on the Zoning Board of Adjustment.

Roark is the third Planning Board member in the last four years to be elevated to an open spot on the council, following Michael Gautreaux (2012) and Nan Holbrook (2010). He was sworn in by the Honorable Judge David Sipprell.

Roark, who is a senior security specialist in the Southern Region for FedEx, said that the council faced a difficult decision in the selection process.

“There were a lot of people who were just as qualified as I am,” he said.

After the first special meeting the day after Christmas didn’t produce any results when ccouncilwoman Mary Cameron voted to table making a decision until the next regular council meeting because of “a lack of communcation,” another special meeting was called on Jan. 2.

This time, a quick decision was reached after councilman Mike Rogers asked for a vote via written

ballot. Roark received all the votes to get the nod to complete the remaining two years on the term for Nelson, who had to relinquish his seat after being elected mayor in November.

Besides welcoming Roark to the board, the council discussed a wide range of topics, including the consideration of a slight shift in the location of the future Towncenter Drive in Village Point.

Gary Looper, village manager, said that while Clemmons owns the right-of-way, discussions are between Village Point LLC and Gibraltar Investment Group to move the intersection about 25 feet to the north for proper alignment.

“That affects us because we now own this right-of-way,” Looper said. “It has been deeded and plated to us.”

The possibility of a road being built by private parties opens up all kind of opportunities for future development in the area.

“If they can work out those decisions, I see no downside to it whatsoever,” Looper said. “I don’t see a need for us to be involved until they bring us some kind of proposal or ask for more help from us, not financial but just administration.

“I see a tremendous amount of upside and the possibility of getting that road built in the near future. There’s no guarantee again, but regardless of what happens, at some point hopefully somebody will come in and turn in a site-plan application. Hopefully, Gibraltar will see the benefit because if will make their property and all the other properties much more marketable. And there’s more interest being shown out there to a degree because of the construction that is going on now with the Parr Apartments complex.”

In the same area in Clemmons, the council approved mast arm signal poles for the intersection of Lewisville-Clemmons Road at Allegacy Way and Towncenter Drive, giving the OK for a state contingency agreement with NCDOT for the locally administered project.

The council also gave the OK to enter into agreement with Kimley-Horn and Associates Inc. for transportation engineering services involving the project and approved a Capital Project Ordinance for the traffic signal.

• Heard from Looper seeking further direction on the firearm ordinance, which was discussed in October with the council approving an amendment to the ordinance of making the language consistent with changes in state law. Bill Lawry, who was elected to the council in November, questioned the need to even have an ordinance and asked that any further changes or action be tabled until the next meeting. It was decided to do so since Lawry and Roark are both newcomers to the council.

• Heard from Looper on the Tranportation Advisory Committee’s new grant-funding process, which includes 24 steps, saying he wanted to make the council aware what is involved.

• Had a discussion on the upcoming council retreat and decided on the dates of March 20-21 at the Catholic Conference Center in Hickory.

• Heard from Looper regarding the website design process. He asked council members to look at the sites and offer input on their observations.

• Heard from Kay Stocking during the public comments portion of the meeting. She questioned the “hastily called” special meetings each of the last two Thursday nights, saying that the public didn’t have an opportunity to know what was going on with the selection of a new council member. “It wasn’t as public as it should have been,” she said.