Student prepares for trip to Prague 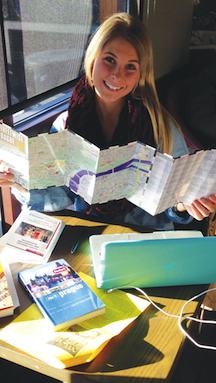 It’s a sign that something is about to happen. Stuff is thrown around the room, piles of toboggans and leg warmers are waiting to be stuffed in the suitcase and carry on bag.

Next week Laken Geiger of Clemmons, a junior at North Carolina State University, will be boarding a plane for an experience unlike any in her past. She along with 58 other NCSU students, including her best friend, will be studying abroad in Prague, Czech Republic for three months.

“You can only prepare so much before you just have to jump in, go, and figure it out for yourself,” said Geiger.

Her desire to study abroad comes at no surprise to her friends and family. Her father is an airline pilot based in Charlotte, providing her the opportunity to travel as frequently as possible. The challenge will be living somewhere that she has never been before, in an unfamiliar culture, while also maintaining her studies in political science, philosophy and a studio course in photography.

According to Geiger, one of her favorite past times is photography.

Regrettably, she has not been able to devote that much time to her hobby but believes this is the perfect time to revive her creativity. She plans to conduct her own photojournalism study on the religious culture of the area, providing a closer look into what people would consider “sacred”.

During the communist reign people were banned from practicing religion. Now, the majority of Czechs classify themselves as atheist and tend to be apathetic towards religion in general.

“Living in the ‘Bible Belt’, even if you tend to be apathetic towards practicing religion, you are still influenced by it, and at times expected to follow certain customs. In Prague, I expect it to be much different,” Geiger said.

With a week left in Clemmons, she is spending her time at Fitness 2000 gym, enjoying home cooked meals and time with family and friends. Her mother was influential in helping her take root and now it is time for her to spread her own wings.

Anticipating her departure Geiger said, “it will be tougher than I realize, I am looking most forward to stretching the boundaries of my comfort zone, exercising my ability to adapt in new situations and embrace living in the moment.”