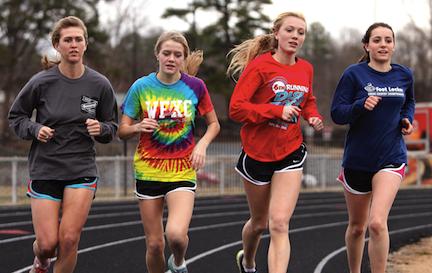 They are the best Titan team you’ve never heard of.

Each an track outstanding athlete in her own right, Alison Price, Mackenzie Newsome, Ellen Spencer and Ashley Smith join forces each week to do battle as the West Forsyth 4 x 800 indoor relay team.

Consider them the Fantastic Four on polyurethane.

With a month still left in the indoor season, the Titans have already recorded the 20th fastest 4 x 800 time in the country and the 11th fastest time ever in North Carolina high school girls indoor track.

“This group is special, as strong as I’ve ever had in this event,” mentioned West girls team coach Nate Newsome. “The first time they ran this season, they posted the top time (9:49) in the state and also broke the school record. If they stay healthy and things go as planned, they have a very good shot at the state title next month.”

All four are multi-sport standouts. Each one represented West on the all-conference and all-county cross country teams last fall. All are safe bets to do the same in outdoor track this spring.

Moreover, Price, the only senior in the bunch, is an all-state soocer player who will undoubtedly be spending her college years competing at the D-I level.

“So far, in individual competition this winter, they have all qualified for the 4-A state meet in the 1000 meter

Teaming with senior Kathryn Hayes, Newsome, Spencer and Smith broke the long-standing school record and led West to a fifth-place state finish in the event last year. Price, a West outdoor track standout since her 10th-grade year, stepped in to fill Hayes’ spot this year.

“Alison was on the (indoor) team last year but was never 100 percent healthy,” Newsome noted. “This year she is and the results are impressive.”

Price runs the anchor leg for the team and currently has a team-best split of 2:22.She credits the group success to a shared focus.

“It’s great because we all challenge each other at every practice and speed workout that we do,” she mentioned. “We push each other to get faster each time.”

Newsome, a junior, agreed. “We’re good friends and have fun together outside of racing,” she said. “But when it comes to race time, things get pretty serious. It’s time to roll.”

Smith runs the first leg of the race and points to intense training and friendship as the ingredients in their success.

“We have all trained so hard since last year and it’s really showing now,” she said. “Plus we’re good friends and that helps too. We talk about all kinds of stuff when we practice and we’re honest with each other. If there is something one of us needs to work on, the others can point it out and it won’t be looked at as being too critical.”

Like Smith, Spencer is a returning sophomore who believes there is no secret formula to the group’s elite performance. Friendship and dedication, she explained, do the trick.

“We’re closer than we were last year and that is really important,” she said. “We’re also focused on the same goals.”

Along with the state title, another of those goals is to qualify for the nationals. A time of 9:40 would be needed to reach that level.

“That’s what they’re shooting for and I believe they can get there,” coach Newsome added. “The indoor nationals are in New York in March. They’re keeping their fingers crossed that they can make it.”

Newsome concluded that state title or not, he might not ever coach a better 4 x 800 team than this.

“I’ve already conceded that,” he said with a smile. “We have four outstanding middle distance runners who are perfect for this event. I could coach for a very long time and never have a team this strong again.”