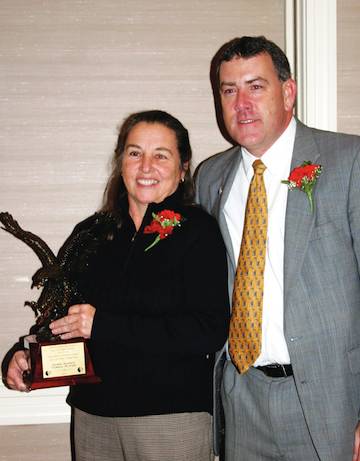 The game is played much differently now, but in her time, Debra Koontz of Clemmons was a force in the world of slow-pitch softball.

Her career was only getting started when she starred for West Forsyth High School.

Koontz was recently inducted into the North Carolina USSSA Slow-Pitch Hall of Fame. Debra played tennis, softball and basketball at West Forsyth High School where she graduated in 1977.

She started her softball career at age 14 under the guidance of her father and coach Jerry Koontz. After playing at West Forsyth she went on to play tournament only softball competing throughout the United States.

Richard Fulton, her coach, was her keynote speaker and he briefly highlighted some of her career accomplishments that included winning several state championships and playing in several world championships.

She has many MVP trophies at home from all the years she played.

She graduated from West Forsyth in 1977. She was named West’s athlete of the year and was named to the All Conference team. She played shortstop and batted .459 with 11 home runs.

After high school she played on teams including the Davie Truckettes, Firebirds, LeBlue, S&S Tractor and Magic Aces.

She played infield, first base, second base and short stop.

Slow-pitch in high school has been replaced with a fast pitch variety that emphasizes accurate and very fast pitching.