Keeping the faith in fitness 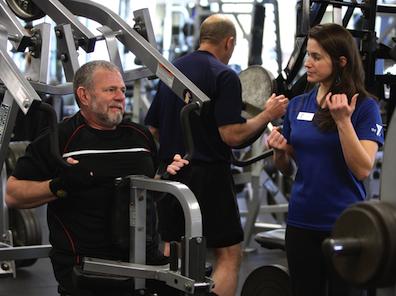 When Paul Bennett finally turned to the Jerry Long Family YMCA in Clemmons, he knew he was in trouble.

“I came in and said, ‘I am going to start working out and eat right,” Bennett recalled. “I weighed 252 pounds and wore size 44 pants. I talked to this gentleman, one of the trainers, and he set me up on a fitness program. They put me on this TreadClimber, and that’s when I realized … I was on it for 10 minutes. Maybe it was closer to six or seven minutes. I was totally out of breath and exhausted, and I shut the machine off. It was not good.”

Lauren Beard, a wellness coach at the Y, saw what was going on and checked on Bennett.

Bennett kept the faith, and slowly but surely started to see positive results. Now, four years later at age 57, he tips the scales between 216 and 218 pounds, and is down to size 38 pants and could “probably get into a 36.”

More importantly, he has his life back.

“If it was not for this young lady, I would have quit,” Bennett said. “I would have just forgot it. I was too far gone. I had been through so many things in my life, and physically I was worn out. This facility saved me life.”

Beard said she first met a man who was upset and very down and out, but she found Bennett “very easy to talk to,” adding: “I learned the kind of things he needed for support, but he is the one who made the decision to continue. He has such a positive outlook and doesn’t want to go back where he was.”

Not only has Bennett changed his own life, he has made a difference in the lives of others. In fact, he spends most of his afternoons at the Y and has made it such a big part of his daily regimen that he is now a part of the annual giving campaign as a storyteller, which is a volunteer fundraiser.

“The funny thing is you can accomplish so much more than you think you can if you make the sacrifice, make the change, make the commitment,” Bennett said. “Then you find how you can be a help to other people. That’s what people did for me. It’s almost like family. You start running into all these different people, and all the sudden, this person is helping this person and so on. It’s just awesome.”

Speaking of family, his daughter Julie, 34, was going through a difficult time after suffering a ruptured disk in her back, and he went with her to a therapist.

“They wanted to operate,” said Bennett, who is married and has two other children. “I went to the therapist with her and saw they had a small pool and what they’re doing there. We’ve got a big pool here.”

An exercise routine in the pool was started, and Bennett was right in the pool with her every step of the way.

“She kept working and has gotten stronger and stronger,” he said.

Another success story involved a young girl, Meredith, who goes to his church and was diagnosed with scoliosis — where a person’s spine is curved — at age 16. Bennett learned many years ago at age 17 that he had the same condition.

“I said, ‘I’ve been here and done this,’ ” he said. “I said, ‘if you let me work with her a while, we’ll see if we can get her moving around. I know how to work with someone like that. The girl has made strides. Her mobility is unbelievable to where it was. What a pleasure and what joy.”

Her mom, Lori Eckenrode, watched her daughter dealing with pain every day. She didn’t really want her to wear a brace and wasn’t excited about her taking medicine. So coming to the Y was worth a shot. After six weeks, Lori couldn’t be more pleased.

“When he first started talking to me, I was very skeptical,” she said of conversations with Bennett about her daughter coming to the Y to work out. “The doctor is very, very impressed with how she’s doing. I can’t say enough. I really can’t. Just the relief that she feels now… The doctor said her spine was like a question mark. No more. Now she is smiling and has hope. There is light at the end of the tunnel.”

Not only is Bennett helping Meredith, he is working with her mom, too.

“I’m a little mad at him,” Lori said with a laugh. “He worked me out really hard today.”

Paul Bennett has always been a fighter.

After the diagnosis of scoliosis and rheumatoid arthritis in his back as a teenager, he kept on going and ended up in a career of doing collision and auto body work. He was poisoned twice “because I painted so much,” but he still considered himself to be in “pretty good shape” until he was about 40.

“It was then that I just kind of let myself go,” said Bennett, who lives in Winston-Salem. “I noticed I was breathing real bad and tired all the time. I wasn’t in good shape at all.”

But it took him until age 53 before he took the crucial step of coming to the Y on a regular basis.

“I was getting old quick,” he said. “I had the Y membership at least 12 years and came a little bit here and there.”

Now Bennett, who currently is self-employed and does remodeling and repair work, is at the Y five days a week.

After all, Bennett has to do his own workout, which usually lasts two hours-plus, and then have plenty of time to help others.

“I am on the treadmill for an hour, and I burn 1,300 hours,” he said. “I always work my back and use the back extension machine. When I first started, I could lift 30 pounds. I lifted 230 today. There isn’t a machine in there that we don’t use.

“I always thought I was a pretty tough guy. I set the chest press at 150 when I started, and I said, ‘this isn’t going to work.’ I started on this machine at 70 pounds. I hope I don’t get in a fight with a woman because she’ll take me out in a heartbeat. I was messing around today, and I can do 290 pounds now.”

However, it’s about more than just the numbers.

“It’s the different trainers and different people you get to know, the front desk, just everyone,” Bennett said. “You get to know people. Now it’s a way of life. I can’t imagine not being here.”

In addition to Lauren Beard, he said that trainers Antonio Stevenson and Dexter Osteen played key roles getting him back on track.

Certainly, there are plenty of people (the Clemmons Y has some 14,000 members) with a number of different stories to share.

Leanna Peters, who is the wellness director, said that Bennett’s focus on taking small steps is a good path for those wanting to improve their fitness and health.

“A New Year’s resolution is a huge deal to most people, and you want to have a goal, and it’s setting small goals,” Peters said. “We are here in any way possible to make your experience good and help you set those goals. Some people just want to lose 20 pounds, and for some people it’s just walking in the door, and we want you to feel welcome and that you will have a community for you all the way from elementary kids to senior citizens and SilverSneakers.”

Since she started her position last April, not a day goes by when she doesn’t see Bennett.

“I see him in here every day,” Peters said. “I saw him working with Meredith and the consistency and creating support groups. Like Lauren, you never know what impact you’re going to have based on what you say or how you treat somebody because you don’t know if they’re having a bad day or not.”

Bennett knows about bad days, but that’s all the past. However, he doesn’t forget where he came from.

“What if this facility wasn’t here or she wasn’t here?” Bennett asked, referring to Beard. “For me, every time I came in, she was asking how I was doing and what was going on. There are so many people you see in here that just need somebody — give you a push, just a little encouragement.”

Beard is glad she was there that first day Bennett came through the doors, determined to get healthy again, but she admits she is surprised with how far he has come.

“I could tell he was a determined man, but I certainly don’t think I ever thought it would get to the point where he would extend himself to so many other people,” she said. “He made the commitment and never gave up. He is a very special person who has come a long way.”