On a roll: Titans extend streak with CPC wins 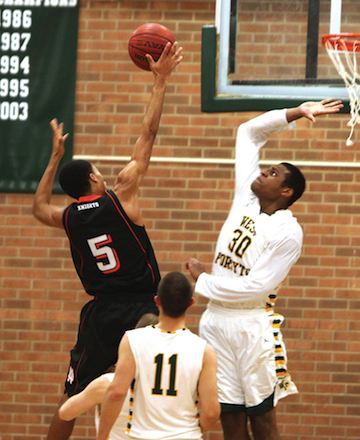 He’s not psychic nor particularly skilled in the art of prediction-making.

But Mike Pennington saw this coming.

A veteran high school basketball coach, Pennington said a month ago that his West Forsyth squad would turn things around by the end of January. He was right.

Saddled with an 0-3 record early in Central Piedmont Conference play, the Titans have climbed back into the playoff hunt with four consecutive CPC wins. Last week they ripped North Davidson 78-51 and Parkland 78-48 to move into a third-place tie in league standings. The top three teams will advance to the state playoffs.

“Someone told me before Friday’s game to ‘stay hot,” Pennington mentioned prior to this week’s away contest against unbeaten CPC leader Mount Tabor. “But that’s not really the case. It’s not that we are on fire or anything like that. We’ve just had the right amount of practice time together and are finally playing good solid defense and taking good shots.”

Losers by eight in the first meeting between the two teams in mid-December, the Titans started fast and easily reversed the outcome by dominating the Mustangs in the first half. The difference this time was simple — better shot selection.

“This time we took the best shot, instead of the first shot,” he explained. “We ran out to a 25-7 lead in the first quarter and that was due to our patience. We had some stops on the defensive end and then moved the ball around until we found the open man. And with the shooters we have, open looks usually result in points.”

Pennington also listed team balance as another reason for the recent surge. “You can go through our lineup and pick out major contributions from a host of people,” he said. “This hasn’t been just a one or two-player deal.”

A week earlier, it was Greg Ballas and Javon Parham who grabbed the spotlight. Ballas sizzled from the outside, hitting six three-pointers and helping West dig out of a 12-2 hole at Davie County. Parham grabbed a rebound and went coast-to-coast to give the Titans a one-point overtime win against Reynolds.

“And there are several others — guys like Jalen Dalton, T.J. Goco and Matthew Pennington — who are also stepping up,” Pennington added. “It’s a group effort.”

But stiffer tests lie ahead. In addition to the Tabor rematch this week (the Spartans won the first meeting by one point), West will also play second-place Reagan next Tuesday.

“We have dug ourselves out of a hole,” Pennington said. “But we have to keep working hard. We’re in a dog fight the rest of the way.”