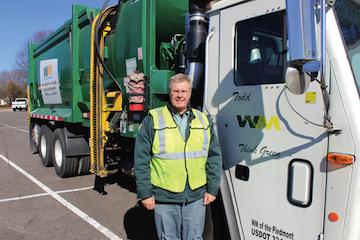 “Thank you,” I said as Todd Hughes handed my son a toy trash truck. The truck looked identical to the one he was driving. Hughes has been driving a trash truck for Waste Management for about seven years now; and like many other children, my son loves watching Hughes do his job. Hughes, however, does not feel like it is work to drive his truck. Hughes says it is more like a retirement job. His reasoning comes from the perspective of a person who has had two previous careers with intense work hours. Nonetheless, driving a vehicle carrying 70,000 pounds in sometimes a low-lit atmosphere or in inclement weather is hardly a job that seems relaxing. “You can’t blink or close your eyes for a second. You have to be 110% committed to what you are doing,” Hughes explains. “Cars are passing you all the time, kids are playing outside, and you have to focus on what they are doing while doing your job.” Overall, Hughes says he really enjoys it. “We never touch the trash. Plus, you get to a point in life where you do what you want to for peace of mind. Thats what this job boils down to– peace of mind.” Hughes has been offered multiple managerial positions within Waste Management. Since that would take him out of his truck, Hughes has turned each one down. The hum of the engine and the interaction with others is the type of environment Hughes wants. “You start talking to people; and it is only for thirty seconds to a minute, but over seven years, it adds up. One woman would bring a drink and crackers out. I would bring her gift-cards for her birthday and Christmas. She would always talk about where she was going and what she was doing. You run into people like that everyday.” One might say, however, Hughes is not someone you run into everyday. He is a man who takes pride in his work. Since starting at Waste Management, he has only taken four personal days in seven years. Some of those days were because his father had a stroke. He still tends to his parents by mowing their lawn in addition to any other items on their to-do list.

So what was Hughes’ to-do list before he entered the Waste Management world? At twenty-eight, Hughes opened up his own boat dealership on High Rock Lake working seven days a week. “I worked for a guy prior to that, but basically ran the shop for the last two years. Then I thought, ‘I could do this.’ I met a lot of people, had a lot of connections, and had saved some money. I owned it for eleven years. It was good for seven years, but the last couple it wasn’t good at all. We went through a drought for two and an half years and the lake dried up.” Once Hughes left the marine industry, he worked for a national linen service. “It was myself and another guy. We had no secretaries and we shared anywhere from 52 to 550 accounts. We sent linens locally and all around, even to national chain restaurants like O’Charleys. We covered eleven surrounding counties. We had to roll the land line into our cell phones and took every call. Every call. If someone needed something on the weekend in Burlington, you would go.” While the money was rolling in, Hughes was working seven days a week at all times of the day and night. Hughes

“One of my hobbies is going saltwater fishing on the coast. One Saturday in 2006, I was at the coast, and it was raining. I saw a job advertisement on TV and saw what a driver would make. I thought, I should do this.” Hughes went home and filled out an application at Waste Management. With one look at his resume, the staff member interviewing Hughes thought he was overqualified. “When I applied for the job, they said I wouldn’t do this and stay on. I said, ‘Give me a chance.’” Hughes was told to go home and think about it for two weeks. Hughes went back and said, “Just give me a truck, I want a route.” Ever since, Hughes has gotten up everyday at 3:30 a.m., driving his truck Monday through Friday. “When I told my wife and friends what I was going to do, they thought I was crazy. But my wife sees how happy I am and she is happy for me.” Hughes adds, “It’s peaceful because I‘ll go down a street and I see the same 6,600 customers. I don’t get lonely because I am too busy to get bored.” And folks never tire of seeing Hughes. Maybe it is because of his generous personality. In fact, the toy truck he gave my son one day was something he bought with his own money. Waste Management used to have a catalogue employees could order free items from once they accrued a certain number of points. When Waste Management decided to discontinue the catalogue, people were told to use up their points. Hughes did not order something for himself. Instead, this neighbor ordered toy trucks to give to the children along his route. Often times, these children are so entertained by the big trash truck and the noise it makes. Todd, the trash truck driver, makes their experience even more enjoyable, as he also does for other neighbors, no matter their age. If one man’s trash is another man’s treasure, I would say we have a treasure in our trash truck driver.