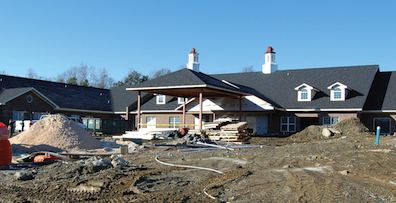 Construction on Trinity Elms health and rehab, a $15 million skilled care nursing home being built by Lutheran Services Carolinas, is about 70 percent complete.

The home will open this spring. The 70,373-square-foot facility is adjacent to Trinity Elms assisted living on Harper Road, formerly the Elms at Tanglewood, also operated by LSC. Construction is scheduled to be completed in May, and LSC hopes to begin caring for residents there at the end of May, says LSC Chief Operating Officer Kesha Smith.

Built by Summit Developers, Inc. of Salisbury and designed by Wilmington architect David Polston, Trinity Elms health and rehab will offer 60 private and 20 semi-private rooms for a total of 100 beds, and it will feature a large hydrotherapy pool. The layout includes four neighborhoods, each with its own dining room and living area.

“People don’t always think of the community benefits of a faith-based, not-for-profit like Trinity Elms,” said LSC President Ted Goins. “Trinity Elms will employ 120 people from the community providing over 225,000 hours of care per year, pay close to $3.9 million annually in wages, and care for some of the most indigent and frail elders in the community.”

Many of the job openings will be for certified nursing assistants. There will also be openings for nurses, social workers, as well as office, dietary, housekeeping and maintenance staff.

The Elms at Tanglewood, was purchased and eventually renamed by Lutheran Services Carolinas in 2008, along with an adjoining tract of land. LSC’s original intention was to acquire the land for a skilled nursing home, one of two it planned to build to replace Lutheran Home – Winston-Salem.

As negotiations proceeded, LSC decided to buy the Elms along with the adjoining 10-acre tract. LSC applied for and was granted a Certificate of Need from the state to split the 217 nursing home beds for which Lutheran Home – Winston-Salem was licensed between two separate homes. When the new Trinity Glen in east Winston-Salem was completed in 2012, 117 residents of the Lutheran Home moved there. The remaining 100 beds will go to the new Trinity Elms health and rehab.

The new home will be the seventh skilled care nursing home operated by Lutheran Services Carolinas, which now has homes located in Salisbury, Albemarle, Wilmington, Hickory, Clemmons, and Winston-Salem.