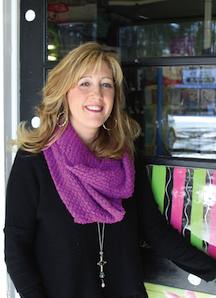 It is a well-known secret, but one that is not frequently admitted that despite all efforts to keep the two separate, one’s personal and professional life undeniably intertwine. Kristina Prysiazniuk’s journey is no exception. Prysiazniuk’s professional and personal joys, along with some of her darkest days have, by osmosis, become one.

The process began when Prysiazniuk was a young lady. Two entrepreneurial parents shaped Prysiazniuk’s perception of the definition of work. After college, Prysiazniuk came home to work for her father’s mortgage business. “It was not what I wanted to do at all,” Prysiazniuk says about the number crunching industry. Thus, when Prysiazniuk could use creative skills to plan her wedding during off hours, she found it quite enjoyable. “At the time, I didn’t realize being a wedding consultant could be a career, but it became a job I did on the side.” From there, Prysiazniuk began selling jewelry literally out of the trunk of her car. Other employees at her father’s business enjoyed the items. Next, Prysiazniuk began to do shows at her house. This soon became difficult once her daughter was born. Eventually, Prysiazniuk came to sell some jewelry at the counter of a local store in Clemmons. After a time, Prysiazniuk was able to rent a small space in that store to sell more items. “I only rented about 300 square feet. Eventually, the owner had to shut down and we began to pay rent and soon took over the store. We grew in small steps.”

Growing with Prysiazniuk, is her daughter, Logan. Logan has showcased her own creative, entrepreneurial side by selling and making unique scarves since she was younger. She also buys clothes for the store. With Prysiazniuk’s daughter now in the store, three generations of family have become involved in a professional setting together. However, they have found out starting a business does not come without some growing pains. “I had to learn about the balance of overbuying items and underbuying. I had to learn about the importance of letting go of staff and finding good employees. I really think that is key to a successful business.” As Hip Chics Boutique took off, Prysiazniuk decided to take a leap of faith and make a change in the perception of the store. “From day one, we always played Christian music here. We decided to step out as a business of faith. We carry a lot of spiritual products. We have prayed with customers. My dad warned me it could backfire,” Prysiazniuk says. “The day we stepped out as a business of faith, our two computers crashed and our back-up crashed as well; so we lost everything we had since day one. We stood strong in our faith and prayed and prayed and prayed and eventually recovered it.” The business prospered, growing from 300 square feet to 4,000.

During this exciting expansion period, Prysiazniuk’s personal life began to spiral downward. “The expansion was huge for us, but it didn’t come at an easy time. The last three years have been the hardest years of my life.” Prysiazniuk’s mother was diagnosed with breast cancer. “My dad also had bypass heart surgery. He then fell and reopened his chest.” Prysiazniuk’s father had to stay in the hospital for almost a month. Good news, however, came when Prysiazniuk’s mother beat breast cancer. Following the small glimmer of hope that life was on the upswing, Prysiazniuk found grief knocking at her door once again when diagnosed with melanoma. Around the same time, Prysiazniuk says, “I lost my personal friend and personal banker both within a week of each other. Plus, one of the girls I work with lost her sister to melanoma at only thirty-five.” Fortunately, Prysiazniuk beat her battle with melanoma and continues to move forward.

Prysiazniuk’s outlook on life has now changed. The new frame of mind which resulted from personal suffering has crossed over into Prysiazniuk’s professional life. “I learned to take everything one day at a time. Sometimes I even had to take things one hour at a time. But we are not guaranteed tomorrow. We must be the best we can be today,” Prysiazniuk smiles. “For me, the biggest thing is giving grace. It’s my new favorite word. Give grace to that person upset in the checkout line. I’ve learned you never know what someone is going through or why they are having a bad day. So it’s important to give them grace.” Perhaps that is a significant contributor to this neighbor’s success — that is, while Prysiazniuk has many unique and hip products, she is also willing to offer them with a little grace. Free of charge.