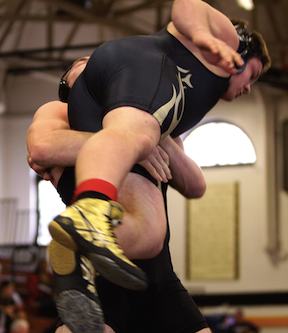 With that in mind, the weight class title captured by senior Quintin Brinkley at the Central Piedmont Conference championships last weekend gave the Titan program a significant momentum boost heading into the final weeks of the 2013-14 season.

A year that has been marred by injuries to key people (Brinkley among them) received a much-needed highlight when Brinkley captured the second CPC title of his prep career.

“Quintin wrestled great in what was probably the toughest weight class at the tournament,” noted West head coach Mike Bryant. “It was a big win for him and a real positive for the team. It helped us finish in third place and that was very respectable considering who we were up against.”

Chief among those rivals were Parkland and Davie County — two perennial CPC kingpins who took first and second place respectively. As expected, unbeaten Parkland ran away with the top spot by scoring 303.5 points. Davie was second with 206 while the Titans were third with 182.5.

Brinkley continued his impressive comeback by improving to 14-0 since returning to the lineup several weeks ago. Competing at 195, he easily decisioned Parkland’s Deshawn McLean 5-1 in the finals. Going back to last year, the win was Brinkley’s fourth in a row over McLean.

“McLean was actually seeded higher but that was due to Quintin’s overall record,” Bryant noted. “He had a few losses early in the season when he wasn’t 100 percent. Since he came back from his injury, he’s been unreal.”

Brinkley advanced to the final round by gaining a decision win over Jamen Senter of Reynolds in the semifinals.

Though Brinkley was the only Titan to win an individual title, two of his teammates also reached the final round. Bryan Olivera-Gomez finished second at 106 while Davis Wooten was second at 126.

“We could have had several other guys reach the finals but our draw in the semis was extremely tough,” Bryant said.

Five Titans won in the final round of consolations to place third overall. Included in that group were Trevor O’Brien at 113, Josh Eller at 145, Owen Helman at 160, Alex Dulin at 182 and Josh Hairston at 220.

With the conference and dual-team season completed, Bryant said the Titans will now focus on regional competition at Northwest Guilford High School on February 14th-15th.

Brinkley will be looking to defend a regional title while returning state qualifier Josh Fuentes will return to the lineup for the first time since he was sidelined with an injury in December.

“Josh was undefeated before he got hurt and had already thumped the top kid in the state 12-1,” Bryant added. “He was off to a great start. Hopefully he can regain his form next week.”