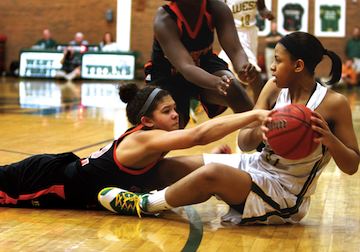 Winning a championship may not be easy, but the West Forsyth girls varsity basketball team sure made it look that way during Central Piedmont Conference play this season.

Dominant wins over Davie County, Reagan and Reynolds helped the Titans lift their CPC record to 11-0. The victories also enabled them to clinch a second consecutive conference title and gain the CPC’s top seed for the upcoming state tournament.

A victory at North Davidson this Friday night would give the Titans their first unbeaten conference season since 1996.

In last week’s play, West added two more lopsided victories in conference play by pounding Davie 57-28 and Reagan 77-51. They owned leads of greater than 20 points at the half of both contests.

Individually, Jazmine Jones and Brittany Hatchett led the Titan offense with 17 and 14 points respectively in the triumph over Davie. Christina Rogers chipped in with nine points.

Against Reagan, the Jones sisters outscored the entire Reagan team. Jessica led all scorers with 30 points while Jazmine added 28.

• In boys play, West knocked off Davie County 82-54. They fell to second-place Reagan 77-51 on Friday night and then dropped a three-point decision to Reynolds on Monday night.

Currently 5-6 in league play, the Titans are tied for fourth in league standings. West will close out the regular season with an away game against North Davidson on Friday night.

Austin Delucia pumped in 19 points and Javon Parham added 18 to lead West past Davie. Austin Rose and Malik Williams had 10 each in the loss to Reagan.