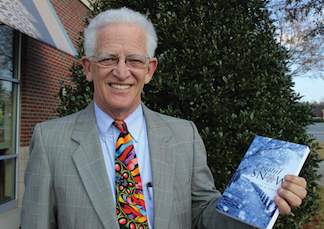 Growing up in Rocky Mount, Robert O’Keef did not always expect to retire in Clemmons. But he and his wife, Phyllis, were following the tiny little footsteps of their two grandchildren. “They are the two best grandchildren, because they are the only two we have,” O’Keef laughs. O’Keef, who is a retired Methodist pastor of forty years, still works at a church. “I work full-time at Bailey’s Chapel but get paid nothing,” O’Keef adds referencing his passion for the church. “Everyone who has become a pastor believes God called them and I believe that as well. I love the preaching part of it, and leadership — leading a church forward.” O’Keef also enjoys teaching at Hood Theological Seminary.

One would assume O’Keef is quite the extrovert. In reality, he says, “I’m a mixture. In my profession, I have to be extroverted; but around my peers, I can be shy.” An aspect of O’Keef’s profession that is a mecca for a more reserved person, is writing. O’Keef first began writing sports stories in high school for the Rocky Mount paper, The Evening Telegram. O’Keef continued to write for the paper through college while attending Wesleyan University where he met Phyllis. O’Keef also went to Duke University Divinity School. After O’Keef married Phyllis, they had a son and a daughter. O’Keef also continued to write sermons. Sermons, however, were not the only item O’Keef wrote. A local politician who attended O’Keef’s church confided in O’Keef his dream to write a book. However, the politician felt he was not a good writer. “So I became a ghost writer,” O’Keef says. “I would interview the politician everyday for 6 weeks; and everyday I would go home and write. I then turned out a 250 page book. I wrote for him and another politician he knew.” When asked if he could say who the politician’s were, O’Keef says, “You have to sign something and keep everything confidential. I have since learned there are many ghost writers for politicians. President Obama probably didn’t write everything in, ‘The Audactiy of Hope;’ and President John F. Kennedy probably didn’t write, ‘Profiles In Courage.’”

One book that O’Keef can claim authorship to is, “Through The Crystal Snow.” “ I told my wife I was going to write a book and she said, ‘Yeah right.’ I sat down not knowing what I was doing and it became the first chapter of the book. It has hardly changed at all. After Phyllis read the first chapter, she said, ‘You should do this.” The book took a year and an half to write and rewrite. “The book has mystery, but it’s not a mystery. It has love, but it’s not a romance. It’s got history, but I did not intend it to be historical. The Library of Congress has classified it as Christian fiction.” O’Keef’s book is about a wealthy man living in the 1800’s who learns he is the father of an adult son on the same day he discovers he is the target of an assassination plot. “The hero decides to die for his son. So there is a collection of stories for the son who begins to discover his father.” O’Keef says the inspiration for the book came to him while serving for a church in Raleigh. “There was a death and when I met the man’s son, he said they didn’t belong to a church and he wanted to have a funeral banquet since they weren’t church people. So they told stories about the man. Everyone told stories. It was a phenomenal event.” O’Keef loved the idea of his readers getting to know the hero through stories being told. Two names O’Keef chose for some of the main characters of his book proved to have some personal irony. “After I wrote the book and it was in the process of being published, I was asked to serve at the church in Davie County. Two of the three main characters are the Barnes and Mayer’s family. Two main families at the chapel are the Barnes and the Mayer’s.” Many have asked O’Keef if there will be a sequel. “I’m pondering it. It’s a lot of work. I’m not sure.”

As for books that O’Keef enjoys reading, he says he enjoys theological readings. His favorite series is the Harry Potter series. He also admits to being a romantic at heart and enjoys Nicholas Sparks’ novels. It makes sense this neighbor enjoys a love story every now and again. His move to Clemmons to see his children raise the next generation is a bit of a love story in itself.