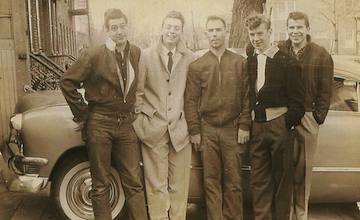 In the 1950’s, colored TV hit stores and the New York Yankees went to the World Series eight times. They won six of them. During that time, Art Frauenhofer was one of the children who could be found running around the nearby streets of Queens. “It was the most wonderful childhood I could have had. I still have two childhood friends I keep in touch with and they would agree with me,” Frauenhofer says in his still-present New York accent. “I walked home all the way from Manhattan one time because I didn’t have enough money to get on the train. And it was safe. I had friends to play with. If you did something like climb on garage roofs, the neighbors would yell at you and say, ‘I’m going to tell your mother.’ And they would. But you also had people looking after you.”

Growing up in a six-family home that housed five families, there were always people around. Perhaps the home’s special enticement was the bakery found in the basement of the house. Frauenhofer’s father owned it. Thus, it was aptly named Frauenhofer’s Bakery. Frauenhofer’s mother took care of Frauenhofer and his brother. She also worked the bakery about forty hours a week, “… or when I was behaving,” Frauenhofer chuckles. He has been told by more than one family member how much energy he displayed as a young boy. “In the summertime, everyone was out to see who was playing what game by 7 a.m. The more kids that were out, the more things you had to do. Of course, the more kids, the greater the likelihood for finding and getting into trouble.” What kind of trouble might Frauenhofer get into? Nothing serious, but certainly games that would make any mother worry about her ten year old who she knew to be full of curiosity and energy.

Frauenhofer recalls, “Nearby, there were two railroad lines that crossed and a field with a playground and baseball field. We used to hang out near the railroads.” Back then, there were railroad detectors who monitored the railroads. They would run after Frauenhofer and his friends, chasing them off of the tracks. An old, dilapidated trolley also provided amusement when the police would come around for safety checks. “The police would come by and yell, ‘Is anyone in there? My friend, Tommy would answer back, ‘No,’” Frauenhofer laughs. “I used to come home with scratched up legs and wearing plenty of dirt. If you were outside playing, you were completely dirty. People will say, ‘ If you grew up in New York, you must have had a horrible childhood.’ But we would get on a train and go to The Museaum of Natural History and Metropolitan Museum of Art — not because we were culturally-minded, but just because we wanted to go run around some place different.”

Another place Frauenhofer would visit every second or third weekend was Connecticut. His father was one of thirteen children. The Frauenhofers would make the trek from the city to see family each month, bringing leftovers from the bakery. They also stayed at a cousin’s house in Cape Cod each Christmas. “My aunt had six kids and two bedrooms — two girls in one room and four boys in the other. I remember for Christmas, all the kids lined up on the stairs — taking up each space. Everyone got a present. It might be a small doll or car, but everyone got a present.”

As young Frauenhofer grew up, he became a typographer. Typography back then was much like what a graphic artist is to today’s technological world. Typographers became very useful after the second World War as print design became more elaborate and colorful. In the thick of the creativity was Frauenhofer. “I was building ads with lead and type. It was sort of like a jigsaw puzzle. It went from a craft, to a trade, to a job.” Frauenhofer worked for ten years in New York. After that, he and his wife moved to Connecticut to raise their three girls while Fraunhofer worked for another newspaper there. “The most thankful job I had was when we moved to Apex and I worked at PBM Graphics in Durham. That guy I worked for was one of the most honest people I’ve known. I told him how much I wanted and he said, ‘You can’t live on that.’ He gave me about a $1.25 more.” Eventually, Frauenhofer decided it was time to retire.

He and his wife followed one of their daughter’s to Clemmons. However, they did not quite retire. Frauenhofer went to an ice cream university, so to speak, for four days in Charlotte and opened up an ice cream parlor next to the laundromat and K-Mart in Meadowbrook Mall. The name? Almost the same as his father’s bakery — Frauenhofer’s Ice Cream. The parlor succeeded. However, after ten years, the Frauenhofer’s were ready to sell. Frauenhofer offered to help the buyer for free for a couple of months, but the gentleman kindly declined. So, when the owner of, “Time To Eat” asked Frauenhofer to make ice cream for the new restaurant, Frauenhofer offered his knowledge. “If he would have paid me $1 an hour, it would have been fine with me. I thought he overpaid me. It was the same ice cream I had sold before. I love ice cream.”

Another passion Fraunhofer enjoys these days is going to the YMCA. He goes everyday to workout and then stays for a cup of coffee, enjoying the social atmosphere. He also volunteers at various part-time jobs. The friendly Frauenhofer just seems to love people. “I would love to get to know my neighbors better. People don’t sit outside on their porch anymore. We used to all the time in Connecticut on Sunday afternoons.”

This reporter could not agree more. In fact, a big reason for this column is to give people a chance to get to know their neighbors better. However, in Frauenhofer’s case, we have a neighbor who, like Benjamin Franklin, has spent a significant portion of his life in the printing business and who will easily leave his energetic and friendly print on our town.