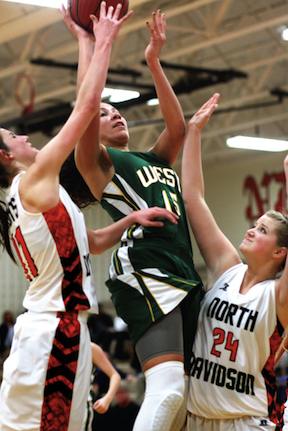 But per January 1, West Forsyth set its sights on becoming an elite high school basketball team.

That decision has obviously served them well. With Monday’s 57-34 win over North Davidson serving as icing on the cake, the Titans emphatically claimed the Central Piedmont Conference regular season title by running the table in league competition.

Their 12-0 record included 12 victories by double-digit margins and is also their first unblemished CPC finish in almost 20 years. They are now 20-3 overall.

“This means so much because we worked extremely hard to get here,” said Titan senior Jazmine Jones, following the win in Welcome. “I can’t really describe it. This is our first year going undefeated in conference play and it shows how much better we have gotten — even though some people may have doubted us. It’s really special.”

Though successful in the early part of the season, the Titans were struggling to find their identity when 2013 came to a close. They were off to a 2-0 start in conference play but had suffered two disappointing losses in the Mary Garber tournament and another at a tournament in Chapel Hill.

“We weren’t really playing together as a team,” explained Titan head coach LaQuanda Quick. “So I had what I call a ‘come to Jesus meeting’ where we put everything out on the table. I told our senior triplets — as I call them (Jones, her twin sister Jessica and Dumebi Egbuna) — that they had to do a better job of getting each of their teammates involved. I told them ‘if you want to be successful, you have to help them be successful. For us to shine as a team, we have to play as a team.’

“They took that message to heart and have become better leaders since then.”

“We accepted that if we play together as a team, practice hard and listen to coach Quick and coach (Takeshia) Rouse, everything would fall into place,” she said. “We just had a new mindset that we weren’t going to put up with losing anymore.”

On the court, Quick noted that moving Jazmine to point guard has also had an impact.

Jones, who recently scored the 1,000th point of her prep career, demonstrated the importance of the move against the Black Knights. After North had sliced a 14-point deficit to six early in the third period, she took the game over by scoring seven of West’s next 10 points. She also grabbed several defensive rebounds and handed out two assists during a decisive 12-2 Titan run.

Jessica Jones also had a big night for the Titans. She led West with 17 points.

Along with the Jones sisters and the consistently effective inside play of Egbuna, West has also received strong outside play from guards Carly Endean, Brittany Hatchett and Christina Rogers. Those three combined for 13 points against North.

With one CPC title safely tucked away, West will now pursue another during the conference tournament this Thursday and Friday. And though they are locked in as the CPC’s top seed for the upcoming state playoffs, Quick added that there is still plenty to play for this week.

“We haven’t won the conference tournament since I’ve been here,” she said. “We really want that trophy. It has eluded us in the past so there is definitely a high level of motivation for us.”

Jones added that the CPC tournament title is yet another significant goal for a team that refuses to let up.

“It would be great to sweep both CPC championships and then carry that momentum into the state tournament,” she said. “As a senior, I really want to keep things rolling. We want to prove that we’re the best.”