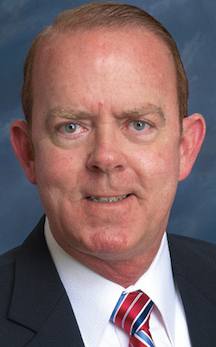 A Clemmons man has filed to run for Congress, challenging incumbent Rep. Virginia Foxx this May in the Republican primary.

Philip Doyle, 54, of Waterford describes himself as a constitutional conservative. He is a retired U.S. Marine who served 12 years, attaining the rank of captain. He was a crew member onboard an OV10 light observation and attack aircraft. He left the military in 1994, moving to Clemmons with his wife and two children, both now grown.

He received a masters of business administration degree from Wake Forest University and has served on the Clemmons planning board. He is a corporate real estate manager, working previously for Meridian and Lowes.

He said he was appalled that Foxx recently voted for an Omnibus Spending Bill that capped retirement benefits for veterans.

“Before we could get on the phone and complain they passed it the next day. That’s Nancy Pelosi’s operandi,” he said Monday.

He said there is a split among the Republican congressional caucus between big government party members and conservatives that has become exaggerated since the Republicans hold the majority of the House.

“They haven’t really lived up to anything they advertised,” he said of the Republican leaderes. “Virginia Foxx is senior. She’s been in 10 years. She owns this.”

In a press release announcing his candidacy, Doyle said, “Virginia Foxx has failed to live up to her previous promises to her constituents. She has failed in her oath to support and defend the Constitution. She has not well and faithfully discharged the duties of her office in defense of the Constitution. Her recent betrayal of our uniformed warriors

of the armed services, as well as the retired and medically retired veterans of our armed services, is an unforgivable offense. Her treachery against those to whom we owe so much has brought shame and disrepute upon herself, her office and the United States House of Representatives.

“As a Veteran and a constitutional conservative, I will represent the Fighting 5th District of North Carolina as a true defender of the Constitution and a warrior to preserve and reclaim the Liberty, Freedom and Sovereignty we are losing more of every day. Our Republic will not survive without every member of the House of Representatives upholding their duty to the Constitution and the principles of real fiscal responsibility, constitutionally limited government and free market economic policies. It is this duty the office requires. It is this duty that must be performed for every citizen of the proud and historic Fighting 5th District of North Carolina.”