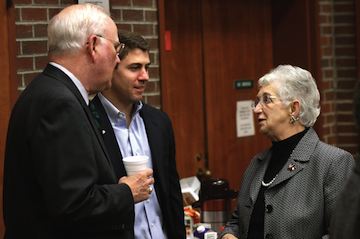 She noted that the Republican-led House had passed a number of bills that would have benefitted the nation’s economy and military, only to have them bottled up in the Democratic-led Senate.

Forsyth Sheriff Bill Schatzman and Mayor Nick Nelson were on hand to welcome Foxx to Clemmons. She spoke at the Clemmons Library

Chris Billups, President of the Clemmons Kiwanis Club, is shown with the Honorable Virginia A. Foxx, U.S. Representative for North Carolina’s 5th Congressional District. The Honorable Virginia Foxx discussed current Congressional issues, bills passed by the U.S. House of Representatives and the general responsibilities of her offices in Boone and Clemmons, and in Washington, DC, at the February 19th meeting of the Clemmons Kiwanis Club. The Club gave her a certificate of appreciation and is presenting a book to the Smart Start program in her name.