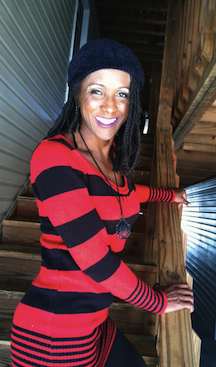 A swan amongst doves is how a 12th grade teacher so eloquently described Joe Coney. The teacher told Coney she too would teach. Coney says, “At that time, I couldn’t fathom it.” However, the teacher, was not the only one to see the special shine Coney possessed. “My friend’s mothers would tell me I was different. My mother always told me I was different — like I was meant to do something.” At seventeen, Coney was a strong athlete with tremendous academic potential. Unfortunately, college was not an option. Coney is one of eight children. Her four older siblings did not attend college. Their mother could not afford to pay. Going against the grain, Coney became the first of her younger and older siblings to leave Cleveland, continue her education, and see the world. She took an Air Force entry test and received very high scores. Coney was in. “I remember my mom being really sad,” Coney says about her mother, Mary. “She always thought I wanted to leave to get away from family, but that’s not true. Cleveland just seemed very dark to me.”

As Coney entered the Air Force, she received an education while also playing basketball, softball, and volleyball. With no interest in flying or jumping out of planes, Coney’s primary job was in the Operation Flying Squadron. “I would write the air crew flying schedule and report to the Wing Commander. I ran the Air Force Fitness program as an alternate job.” Coney worked in places like Germany, Turkey, and Okinawa, Japan, just to name a few. Traveling was eye-opening. Yet, a greater adventure lie ahead. At twenty-five years living and working in Texas, Coney became pregnant. The father did not want to be involved. “I was never afraid. I knew I was going to have my son,” Coney says about her son, Antonio. “He was the greatest thing in the world for me. I feel like the Lord put him on the earth to keep me sane.” As a single mother in the military, Coney found a wonderful support system. “I had a babysitter from England named Helen. She would call me during his first steps and first words. So I missed those first treasures as a single parent having to work, but I remember so many of his other firsts– his first birthday, first day of school…” Someone else who became a part of those milestones, was a man named, Cleve. While Antonio was just six months old, Cleve, a boyfriend at the time, told Coney he wanted to be Antonio’s father. While Coney and Cleve’s relationship ended, they are still friends and he is still Antonio’s father.

Cleve played a crucial role when Coney was called to Korea and could not bring Antonio. “It was the longest year of my life, being away from my son.” While heart-wrenching, it was in Seoul, Korea, where Coney first became a teacher. “It was fitness with an aerobic program. I got my certification and we had to teach nonverbal classes because of the language barrier. That was my first teaching moment.” Coney was hooked. She loved physical fitness and thrived on teaching others how to stay healthy.

For over twenty years now, Coney has been a personal trainer. In 2004, she worked at Sara Lee, then at Gold’s Gym and finally ended up at the Clemmons YMCA. She officially left the military in 2008. However, two years later, Coney was told she needed back surgery. Then three years later, neck surgery. “Back surgery was traumatic at first because I could not really do anything for four months.” Antonio, now a grown athletic man at 6-feet-4, helped nurse his mother back to health, along with Coney’s niece. Members of the Y staff also sent their support through hundreds of cards and surprise visits.

“With my surgeries, I was not able to continue my personal training because of the lifting aspect. Being a personal trainer and teaching wellness is everything to me because I like the interaction with the people. I wanted to continue to do that in some aspect and thought maybe I could take it to a higher level.” The back injury motivated Coney to attend Winston Salem State University. She is majoring in exercise science and is deciding whether to pursue occupational therapy or cardiac rehabilitation.

Coney believes her 12th grade teacher certainly played a role in her pursuit of her profession. However, her older sister, Charlen, also saved her from rough terrain. “Charlen was on drugs and on the streets for eleven years. During that time, she somehow educated me about the streets, what corners to stay away from and managed to keep me off of them. She eventually went to rehab and has now been clean ever since.” Coney’s mother, who was also a single parent, is a role model. “My mother has seventy grandchildren. She has grandchildren, great grandchildren, great, great grandchildren and two more on the way. When she raised us, she went to work at the same time I do now — at 4:00 a.m. After work, my mom was still able to come home and raise eight kids. She cooked dinner — she’s a great cook — we always had clothes, shoes, all our immunizations. We never felt without. She believes in the Lord. I think that had a lot to do with it. To this day, she still goes to church and has her bible.” While many helped shape Coney’s future, our neighbor seems to glide through life with strength, serenity, poise, and beauty — much like an elegant swan.