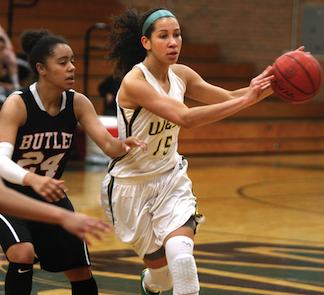 The city of Greensboro bills itself as “Tournament Town.”

Considering a recent trend, it could also be known as “Titan Town.”

Thanks to a harrowing 53-52 victory over Alexander Central last Friday night, the West Forsyth Titan girls varsity basketball team will visit the Gate City for state playoff competition for the third year in a row. Two years ago, West traveled to Greensboro and returned with a regional championship. Last year the Titans visited Greensboro Page High School and suffered a season-ending loss.

This week, West will return to the Greensboro Coliseum for regional semifinal play. As was the case two years ago, the Titans will meet a strong Myers Park team (27-1) in a regional setting. The winner will face the Ardrey Kell-Mount Tabor winner in the regional finals on Saturday at noon.

“Anytime you play high school basketball in Greensboro during the month of March, it’s a good thing,” mentioned West coach LaQuanda Quick, after her team improved to 25-3. “We’re excited to be going back and we feel confident about our chances.”

Quick said the scouting report on Myers Park is a familiar one.

“Like us, they have several players who played for them when we met two years ago,” she said. “(Rhydeiah) Rogers (the daughter of former Wake Forest University and NBA star Rodney Rogers) is back and she’s a strong inside player. Their point guard is also back.

“But Jaz and Jess (Jones) and Dumebi (Egbuna) are back for us. Plus Victoria Washington was on our team two years ago.

“And our other girls got a chance to experience a tournament atmosphere against very strong teams during our Christmas tournament in Raleigh last December. As a whole, I don’t think we’ll be nervous about the surroundings.”

West wasn’t nervous about their trip to Taylorsville for a third round game against Central. Coming off a dominant victory over Matthews Butler earlier in the week, the Titans were playing as well as they have all season.

But after starting forward Jessica Jones was whistled for two questionable fouls in the first minute of play, the Titans struggled to find their rhythm and eventually fell behind by 13 points.

Quick later admitted that she was concerned about the quality of the officiating.

“I hardly ever complain about officials but they were calling fouls on us that just weren’t fouls,” she said. “It was very frustrating, especially in the first half. But I give our girls a lot of credit. They kept their composure and rallied in the second half.”

In keeping with the harsh winter weather conditions, West also used a special form of “ice” to secure the one-point victory in the closing seconds of play.

Clinging to a 53-50 lead, the Titans committed a three-shot foul with less than one second left to play. After the Central player drained the first two free throws, Quick wisely called a timeout.

“The goal was to ice their shooter and avoid overtime,” she mentioned afterwards. “Fortunately it worked.”

Unfortunately, a quick follow-up shot by the Cougars created a confusing ending that left the Titans in an uncomfortable situation.

The subsequent shot by the Cougars was waved off by officials because time had expired. Thinking the gesture by the ref signaled a West foul on their shooter, Central players and coaches protested vehemently.

“They were really angry at how the game ended and the referees left the court immediately without giving an explanation,” Quick said. “I went over to shake the hand of their coach and he refused to shake mine.

“After that we had to have an escort as we left the court and headed for the bus. We were just happy to get out of there.”

Quick praised her entire team for gutting out a tough win and also singled out the individual efforts of Washington and Carly Endean. Endean hit two huge three-pointers down the stretch to give West the lead.

“Carly made a couple of very big shots and also played great defense. Victoria played well on defense too. The two of them don’t often get the credit they deserve because their numbers aren’t big in the box score. But they have both been important contributors all season.”