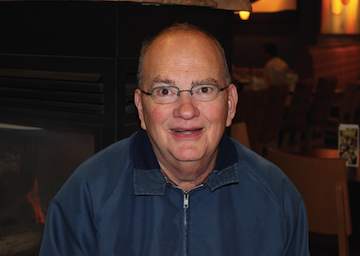 As I walked into Panera Bread, Marc Fairchild quipped, “You must know my wife, Morgan?” He is referring to Morgan Fairchild the prominent actress who was on shows such as “Dallas” and “Love Boat.” Laughing, I ask Fairchild if he would like to grab a treat before our interview. He agrees and offers to buy. I am adamant about paying for both of us, but he jests, “I need to do it. It will be a tax deduction for form 554598.” Once he orders a chocolate chip cookie, the cashier hands him the cookie in a bag. Fairchild holds up the bag and asks, “Do I get free refills on these?” I tell Fairchild he is pretty funny. He says, “Prozac. 13 pills a day.” All humor aside, Fairchild admits, “You grow up around people who think they are comics, you pick up on a thing or two.”

Growing up in Ashland, Kentucky, Fairchild says there were two types of entertainment — the movie theatre and the bowling alley. A miniature bowling ball was put in the small hands of the then five-year-old Fairchild. “My dad was showing me the ropes. Back then, it was 50 cents a game for adults and 35 cents for kids. It only cost 20 cents for a pair of shoes.” Whenever little Fairchild knocked down the pins, there was a man who would manually set the pins back into a perfect triangle. The same man would roll the ball back down on a rack. “I learned how to keep score in the first grade. Keeping score in bowling is all math. I love math, keeping score, and keeping track of money.” Fairchild adds, “You had a sheet of paper and pencil. You didn’t have the scores automatically calculated back then. You had a piece of notebook paper which was more like a long sheet which made up as a score card.” Fairchild began to bowl in youth leagues at age eleven. Bowling, which is an all-season sport, with the exclusion of summer, became Fairchild’s life. At age fourteen, he got a job at the local bowling alley. He knew everyone who came in and out of the bowling alley and they knew him. They were family.

Fairchild’s own family was having personal discord during his senior year of high school. His parents split, which meant Fairchild could not afford college on his own. He quit after one semester and went back to the bowling alley. “At eighteen, I was making $18,000, which was good money for an eighteen year old.” With Fairchild’s humor, he easily enticed bowlers. “My job was with the people — promoting bowling and getting people to join the leagues. We were a dry place. We got a lot of people from churches and organizations. But, I just enjoy people.” Over the years, Fairchild saw, “… babies turn into adults and generations come through. I had a lot of adopted fathers.” So when the owner sold the alley, Fairchild was shocked. “He knew for a while he was going to sell, but he never told me. He had become an alcoholic.” A month after the new ownership came in, thirty-nine year old Fairchild was fired and replaced by someone younger and cheaper. Much like with his parents divorce, Fairchild felt as if his family had separated.

Fairchild went on to work at a grocery store and later at Revco before it became CVS. While employed at Revco, Fairchild suffered a massive heart attack. Consequently, has a pacemaker on his chest. Fairchild then moved to North Carolina and worked as a sales representative to service Kerr Drug stores in the state of North Carolina. It was in North Carolina that Fairchild found a new family.

“I fell in love with a blonde-headed lady working at K-Mart. Register 13. That was in 2005 and the rest is history.” Merle became Fairchild’s wife. “Merle is the best thing that ever happened to me. I wish I would have met her at my third grade picnic.” Along with Merle came three wonderful children and a dog named, Rebel. “I wasn’t sure about Rebel because Rebel can leave messes around the house.” Rebel, however, won Fairchild’s heart and soon went with him everywhere.

In fact, one time he was carrying Rebel in his arms while at the bank when a woman came up to Fairchild and said she did not appreciate Fairchild carrying that darn dog because she had allergies. “I looked her straight in the eye and said, ‘Ma’am, this is my seeing eye dog.’ Then I started to search around for my keys with my hands. I walked out the door and patted the side of the car door seeing where to go with my hands. I strapped Rebel in the front seat, revved the engine and drove off. She screamed,” Fairchild laughs as he recollects.

It was also because of Rebel that Fairchild came to work at the Dollar Tree. The store manager, Bobby Pruitt, often struck up a conversation with Fairchild as Bobby stopped to pet the dog. Eventually, Fairchild asked if there was any part-time work. Bobby gladly hired Fairchild; and Rebel can sometimes be seen in the back of the story occasionally. “Bobby is such a good boss and treats us like family,” reflects Fairchild.

When Fairchild tells me this, I say, “So it has all come around full circle. You worked in the bowling business which was like a family and now you have found a wonderful family with Merle and with Bobby at the Dollar Tree.” At that point, Fairchild presses down on his pacemaker as if it is a microphone and says, “Dr. Phil you are fired. Do you copy?”

At the end of our interview, I tell our humorous neighbor I need a picture. His response, “I haven’t had my mugshot taken since 1938 during my days with Bonnie and Clyde.” Chuckling once again, I feel my spirits lifted. What a gift our neighbor has — making his mark on others by supplying those around him with a little laughter.

“Your Neighbor” is a feature by Jill Osborn. If you have a neighbor everybody should know, reach Jill at jill.n.osborn@ gmail.com. Also follow her blog on parenting at MuchAdoAboutMothering.com/