Growing up fast: Young softball team should compete for title 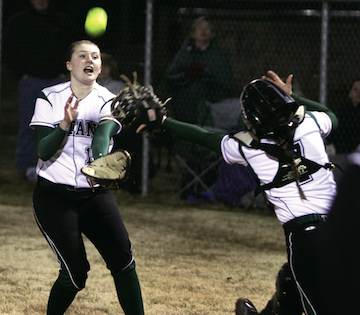 Their season forecast mirrors the local weather forecast of the past seven days.

And as coach Kevin Baity sees it, the cold snaps should be melting away as the 2014 season progresses.

Unfortunately, their youth could lead to a few gloomy nights — like the one they endured in Yadkinville last week. Off to a 2-0 start when they traveled to meet Forbush, the Titans stumbled defensively and suffered a 7-6 loss.

“I would like to think that we absolutely cannot play any worse than we did in that game,” Baity mentioned afterwards. “We made six errors — and I was generous in scoring — on routine balls that we handle all of the time. But we still lost by only one run. It was just one of those nights where we had a big defensive letdown.”

With Central Piedmont Conference play set to begin this week, Baity said he expects the non-conference loss to be an anamoly. With a pitching staff that includes three aces — junior Ally Wooten along with sophomores Brooke Perry and Sydney Vaughn — he is probably right.

“I have coached for a long time and have never had three pitchers with this much talent on the same team,” he said. “And they’re fortunate enough to have a great pitching coach (former Titan star Mendy McKenzie). Mendy pitched at the highest levels and they will learn a lot from her.”

In the infield, the Titans will be led by returning junior Jenny Dodd at catcher. Junior third baseman Lisa Davis will team with shortstops Taylor Ferrell (sophomore) and Hollie Norris (senior) to anchor the left side. Madison Baity, a sophomore transfer from Forbush, and returning sophomore Hannah Runge will split playing time at second base and left field, while sophomore Jenna Bowman (up from the junior varsity) and returning junior Hannah Black will each see time at first base.

Along with Baity and Runge, other Titans who will see action in the outfield are Anna Marino, sophomore Cammie Pereira, Claire Hess and Caitlin Hill (a sophomore who also plays for the West girls soccer team). Like Norris, Marino and Hess are also returning seniors.

Baity is once again joined on the coaching staff by Brian Bowman.

“The upper tier should be us (second place last year with an 8-2 record), North Davidson (the defending champion) and Davie County,”

he noted. “North lost their two ace pitchers from last year but they will still be strong. Davie has a number of returning upperclassmen and is a very fast team. We should be right there with both of them but it’s hard to predict who will finish where.

“Then Reagan is in the middle and the other teams (Parkland, Mount Tabor and Reynolds) should be battling for the fifth spot.”

West is slated to begin Central Piedmont play this week with a home game against Parkland on Tuesday and an away game against Mount Tabor on Friday. Sandwiched between those matchups will be non-conference games against Southwest Guilford (Tuesday night at home, after

the Parkland game) and Surry Central (at home on Wednesday).