Youth cleans up with new business 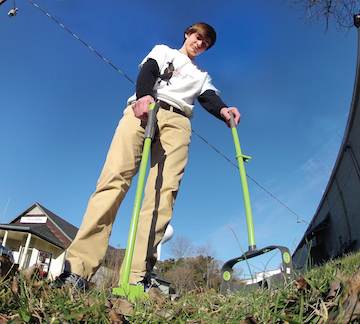 Remember that first job you had as a kid?

Maybe it was mowing yards, being

a babysitter or perhaps having a lemonade stand. But scooping poop?

Enter Zach Glontz, who is a sophomore

“I always wanted to be an entrepreneur,”

said Zach, who will turn 16 this month. “I got into the business

when my stepdad kept asking me to go and scoop the backyard. I was like, ‘Well, why don’t I start up a business? There was no one in Winston-Salem or in Clemmons or in Lewisville, so I decided to start my own.”

That was in 2011, before he even became a teenager, but the business

got off to a slow start with only one customer in the first couple of years.

“The original name was Cacacollectors,

but people were not getting the name,” Zach said. “Then I went with Animal Doodies. It’s a little pun, but that has made all the difference.

Once I changed the name, people started calling me. Now I’ve got nine customers, five in the last month.”

Zach lives in Clemmons West, but most of his clients are in Waterford.

His focus is on residential properties, but he also will do commercial

(apartments) properties or parades, which he did once when he picked up after the horses in a Winston-

He is ramping up the business by advertising in the Yellow Pages and just started a premium ad on www.pooperoni.com.

If you click on the site and enter Clemmons, N.C., Animal Doodies will pop up with his phone number and website along with a description

of his services — including weekly pooper services starting at a low price of $9.95 and two free services

“Our dogs offer us unconditional love, and in return all we have to do is feed them, play with them and occasionally

pick up their poop,” the ad states. “Unfortunately, as much as we love our dogs, we hate picking

up their waste just as much! And that is where Animal Doodies comes in. We take care of cleaning up after your dogs, so you can just focus on loving and enjoying them.”

Rates start at $10 a week for one dog in an average-size yard. Each additional dog is $4. Those interested in signing up, can call Zach or fill out a form on the contact page on the website. (He also offers to clean cat litter boxes for a fee of $7.)

He walks through the entire backyard and then double checks after that to make sure all the poop is gone.

“I have one customer who has four dogs, and one just has one small dog,” Zach said.

He expects his business to grow with the new advertising and getting the word out around Clemmons.

Until now, he has kept quiet about his poop-scooping business.

When asked if he expects his friends to kid him about his unique endeavor, he said, “I don’t know how it’s going to go. They’ll all find out when they see this in the paper. I didn’t really

want anybody to know for a while. It will be a few laughs, but it will die down after a while.

But I’m ready for it. It will be good advertising. If people start talking about it, I’ll get more customers. That’s my plan.”

Zach said that his stepdad, Mark Snow, inspired him to start the business because he was always stepping in poop in the backyard. His mom is Robin Snow, and he has two brothers and a sister.

“Now since I always make sure our backyard is clean, they love to walk and play with my little brother in the backyard without the worry of him or my parents stepping in poop,” Zach said.

He added that his Uncle Michael helped with the Web side of the business and teaching him how to invest his money, and that his grandmother, Claudia Fowlkes, drives him to his jobs.

Zach said that his niche business is affordable and fills a task most don’t want to deal with.

“A lot of people don’t have the time, and it’s dark when they get home from work,” he said. “I can come during the day, usually on the weekends, and make sure there is no more poop in the yard.”

Zach said that his dream college “would probably be Duke and go to business school.” But he doesn’t stop there. He added he would like to become a doctor — a people doctor, that is, instead of a veterinarian.

He still has plenty of time to figure it all that out. Zach is busy with his school work and involved in a couple of business clubs in addition to enjoying playing soccer at West and for Twin City Soccer.

Now he looks forward to taking his business to the next level.

“My goal is to take this business through college,” Zach said. “and maybe keep the business or sell it 20 years or so later to open up a much bigger, different kind of business.”

If you want more information on Animal Doodies, call Zach Glontz at (336) 618-9745 or visit www.animaldoodies.com.