Jane Crouse does the math 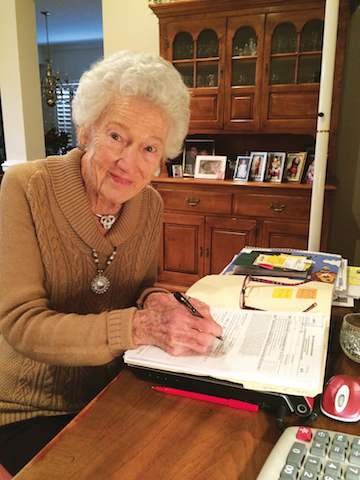 The tobacco market was a booming market during the 1950’s. Celebrities like John Wayne and even Santa Claus could be seen smoking a cigarette on a flashy magazine advertisement. In the midst of the tobacco industry was twenty-two year old Jane Crouse. Although she did not partake in the extravagant cigarette displays, she traveled to the various tobacco markets. Row after row of gathered tobacco leaves would sell in various warehouses. Crouse’s father kept a warehouse in numerous markets. The markets had a rhythm — a consistent beat that was followed year to year. “The markets didn’t stay open but for so long. We first went to Georgia. That market lasted for six weeks from the middle of July to August,” Crouse says. “We would stay until the end, until they were finished and sold. Then we would come to North Carolina. The tobacco market here would last from August to November. We would travel to places like Virginia, Tennessee, and Indiana. The market was a fascinating

place and I had a fascinating job.”

What exactly did Crouse do? Since math was her strongest subject, it only made sense that she would keep the books for her father. “You never got bored. All the farmers were really nice people and you got attached to them. Tobacco people were close knit and everybody liked everybody.” Crouse enjoyed her job but it only lasted through January. The markets

would then close. Once January hit, Crouse would come home and hone her math skills once again. She prepared taxes during tax season until April. The tobacco market would begin soon after.

Though she loved both of her professions, Crouse did become a bit uneasy when her Dad learned he would be audited. The auditor, however, drew the ire of Crouse’s father. “My daddy told the auditor, ‘You are just auditing me because I don’t go to a big company and use a C.P.A. But my daughter works better than any C.P.A. and she is more sincere.’” Crouse adds with a smile while nodding her head in agreement, “…And I worked hard because I was working

for my daddy. They audited him for three years and at the end of the three years, it turned out they actually owed my daddy money. He didn’t take it. He was just glad to have them leave.”

The tobacco market influenced Crouse’s life in other important ways. One day Crouse’s father, who was having a conversation with a gentleman one day in Hazelhurst, Georgia

at one of the tobacco markets. The young man caught the eye of Crouse as he came back to the office. The office, at the time, was an area that had been sectioned off outdoors by chicken wire. The man’s name was Henry Crouse. “It was awhile before we started dating because I wanted to make sure he wasn’t married. A lot of boys would tell you they weren’t married and they actually were. They would tell you anything for a date,” Crouse says with a laugh. Henry’s work ethic became noticeable to Crouse. He worked diligently and was well liked because of it. Eventually, Crouse accepted a date with her future husband.

In 1965, they moved to Clemmons and Henry began to work for Reynolds. They also had a son, Norman, who now serves on the Clemmons Council. “Norman has been as good of child as anyone could ever have. I worried about him, but he never gave me a reason to worry.” Crouse also boasts about her grandchildren, great grandchildren

and her two younger brothers. “I just love them all — especially my grandchildren.

I have had a real good life. I have had a lot of sad things happen in my life but I have the most wonderful

family.” One of the sad events Crouse is referring to, is the loss of her husband. He was only fifty-seven when he suffered an aneurism.

“When you lose your husband, you never get over it. That was the worst thing I ever had to go through. I got through it with the help of God. God still takes care of me.” Crouse adds, “He keeps me from getting in trouble.”

Why not retire? “When I first got started, we would only have to turn in about three or four pages to the government. Now it could be up to fifty or more pages. You can hardly get them stapled they are so thick. Some people have been with me since 1958. Some have died, but I still do their children’s taxes,” Crouse adds in her kind southern voice, “I have an awful lot of good friends. I love them all and they love me. I would feel like I would be letting them down if I retired.”

Oscar Wilde, once said, “Some cause happiness wherever

they go; others whenever they go.” Unlike a hard math problem that is difficult to solve, the answer is most certainly clear that our neighbor, who has lived a captivating life crunching numbers, is the type who causes happiness wherever

“Your Neighbor” is a feature by Jill Osborn. If you have a neighbor everybody should know, reach Jill at jill.n.osborn@gmail.com. Also follow her blog on parenting at MuchAdoAboutMothering.