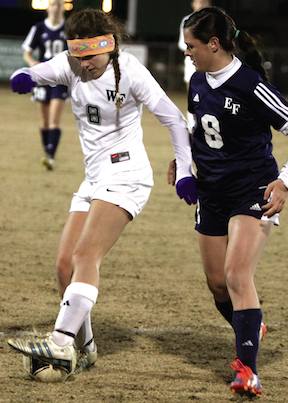 Coming off of back-to-back undefeated conference seasons and a recent championship win in the Forsyth Cup tournament, coach Scott Bilton knows his West Forsyth girls soccer team won’t sneak up on anyone this season.

In fact, he expects the opposite. The Titans will undoubtedly get each opponent’s best shot.

His veteran players are also well aware of this fact. They’ve dealt with it before.

But for the younger players on the 2014 roster, it is a challenge that can only be appreciated with experience.

Last week the younger Titans got a taste of what can happen when you lose momentum against a quality opponent.

Missing all-state forward Alison Price (who was competing in a national track meet), the Titans let a 1-0 halftime lead slip away and suffered a 2-1 loss to East Forsyth in a non-conference match between two of Forsyth County’s top teams. The setback was the first of the season for the 10th-ranked Titans and provided a timely reminder of how quickly things can change in high school play.

“I am hopeful that the team will realize that even though we are talented, we will not get results if we do not take advantage of opportunities,” said Bilton, who had to miss the match due to a death in his family. “But overall I am very proud of this team. With this being the first year of the Forsyth Cup, we went into that event really wanting to win. And even though the weather played havoc with us being able to get all of the matches in, it was worth the wait. It turned out to be a great tournament for us.”

Including Price, a two-time all-state senior forward and the reigning Central Piedmont Conference Player of the Year, the Titans return six key starters from a team that reached the quarterfinal round of the NCHSAA 4-A state playoffs last spring.

Like Price, sophomore Caitlin Hill is also a returning forward. An all-conference performer one year ago, Price was second on the team in scoring with 13 goals.

Junior Meredith Long is back in the midfield after an all-conference season in 2013. She was second on the team in assists (with 11) and third on the team in scoring (with nine goals). She is rejoined by Kathleen Moore, a midfield standout now in her sophomore year.

Of the newcomers, Bilton said Mallie Witt has moved into a starting spot as has freshman Elizabeth Neblett.

Sporting a 4-1-1 record, the Titans now face their most challenging week of the young season. They will take on CPC rival Mount Tabor on Thursday and then play Myers Park (the team that knocked them out of the state playoffs last spring) on Saturday.