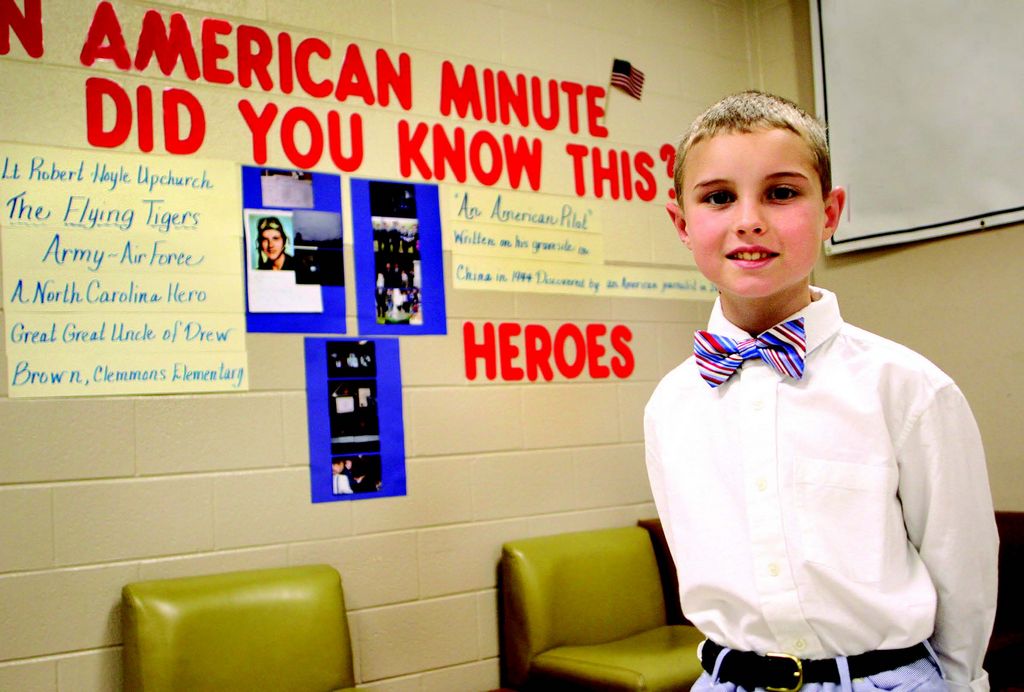 The project was intended to highlight the people, places and events of our great nation.

But when Clemmons Elementary School third-grade teacher, Susanne Ledford, decided to have her class work on an “American Minute Wall,” she had no idea that a worthy and notable figure would have ties so close to home. As it turned out, one of her students, Drew Brown, was directly related to an actual World War II hero.
It was while the students were doing research for the wall that they learned of one of America’s heroes who flew with the Flying Tigers during World War II, under General Chenault, His name was Lt. Robert Hoyle Upchurch and he was Drew’s great, great uncle.
The history lesson began one day when Drew was riding in the car with his mom Erin. Drew asked his mom if anyone in their family had any ties to World War II.
“My mom told me the story of how my great, great uncle flew with the Flying Tigers,” he said during an interview at school. “I didn’t know about it at all. It was pretty exciting to find out.”
In 1944 Lt. Upchurch crashed into a mountain in China. He was declared MIA and was buried. In 2005, his grave was discovered by an American journalist who called the American Government. After extensive DNA testing was performed, his body was returned to the United States in 2006.
“Mrs. Ledford is the driving force of this American Minute Wall project,” mentioned Principal Thomas Keener. “She deserves a great deal of credit for bringing this hero to our attention.”
When asked what was the most interesting fact was about his great, great uncle, Drew simply said, “I think it’s really, really cool that he flew a P-40 plane. I wish I could have met him.”

Jane Crouse does the math