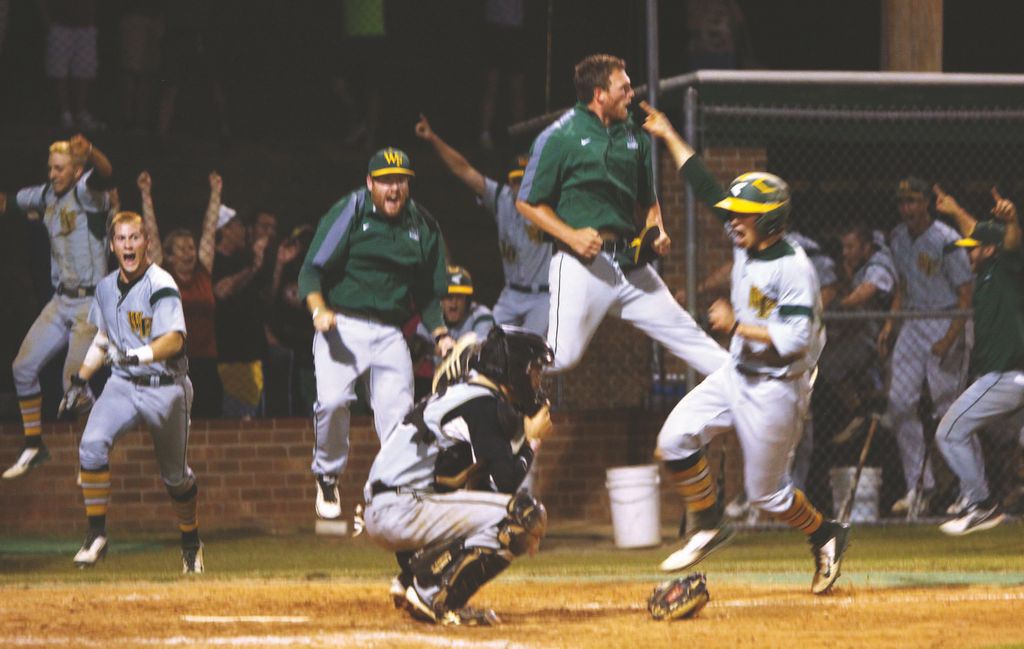 Mojo, karma, divine intervention…
Call it what you want but West Forsyth had more than just athletic ability going for it in the thrilling regional championship game win over Charlotte Providence last week.
Ahead by one game in the Best-of-3 series, the Titans returned home for game two and proceeded to demonstrate what can be achieved through sheer will. They had fewer hits (10-4) and more errors (3-1) than their opponents yet somehow managed to pull off a dramatic 2-1 extra-inning win to clinch the Western Regional title.
The win also earned West a berth in this year’s NCHSAA 4-A state championship game. It marks the first time since 2002 that West has qualified for the state finals.
“This is what we’ve done all season,” mentioned senior Alex Saphar, after he drove in the game-winning run with a soft single over a drawn-in infield in the bottom of the ninth inning. “We battled, kept it close and then scored when we had to. I was just trying to hit it out of the infield and fortunately it dropped in.”
Titan head coach Brad Bullard agreed and added that experience in close games helped make the difference.
“We have been in so many tight games that we never panic when it’s close late in the game,” he said. “But this wasn’t a typical West effort in that we made three errors. But our pitching was unbelievable. Travis (Holden) went six strong innings and Alex (Vanderstok) shut them out for three innings to close it. Against a great hitting team like Providence, that’s an amazing accomplishment.”
Equally amazing were the number of big plays the Titans made in key situations.
First baseman Matt Pennington had a run-saving scoop on a throw in the dirt with two outs in the fourth inning. Centerfielder Aaron Stamper made not one but two great plays in the sixth.
The first came when he ran down a long drive in the gap that appeared to be headed for extra bases as it left the bat. Then, with two outs, he scooped a hard single to center field and made a tremendous throw home to nail a Providence runner at the plate. Catcher Zach French made the tag.
The dramatic game two victory somewhat overshawdowed a dominant 10-5 win by West at Providence in the series opener one day earlier.
In that game, the Titans built a 9-0 lead in the first two innings and then got a late solo home run from Vanderstok to nail down the victory. French led West’s 11-hit attack with a two-run single in the first and another two-run single in the second.
On the mound, Bates started and went five strong innings for the win. Reliever Jake Mayhew took over in the sixth.
“These were definitely huge wins,” Bullard added. “But we’re not finished yet. We still have two more to go.”