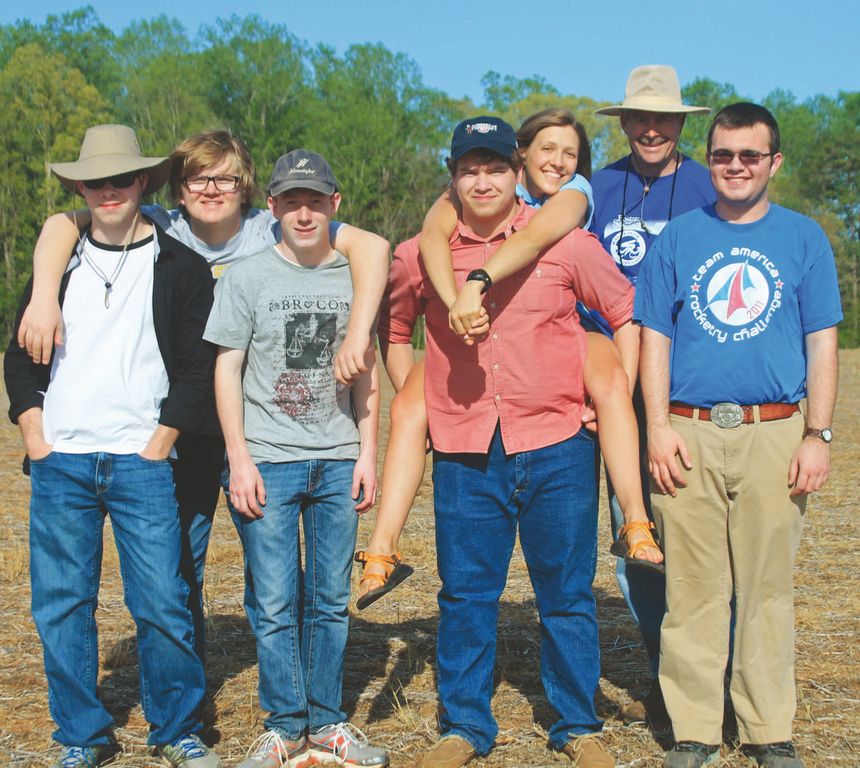 Six students from West Forsyth, R.J. Reynolds, Atkins Magnet, and Reagan high schools beat out more than 700 teams from across the country to advance to the national finals of the Team America Rocketry Challenge. After months of preparation and a strong showing in TARC’s qualifying round, team “Absolutely Ridiculou,” sponsored by West Forsyth High School, traveled to Great Meadow in The Plains, Va. for a final fly off on May 10.
With 5,000 annual participants, TARC is the world’s largest student rocket contest. In one of the most difficult challenges in the competition’s 12-year history, teams must design and build a model rocket that can travel to exactly 825 feet and back within 48-50 seconds while carrying precious cargo — two raw eggs that must return safely to the ground undamaged.
“This year was especially difficult due to the newly added sum rule… rather than simply looking at the best (lowest) flight score, teams were ranked based upon the sum of their two best scores. Essentially, greater emphasis was placed on consistency. From initial construction to launch day preparations, we worked exceptionally hard to eliminate small deviations and maintain as much reliability as possible. I really think this attention to detail has played a major role in our success as team,” said team member Allison McGuire.
Absolutely Ridiculous is a unique TARC team in that, although sponsored by West Forsyth, its members are drawn from four area high schools. This is West Forsyth’s first year sponsoring a TAR team, but the competition is not new to the Winston-Salem/Forsyth County school system. Schools in the district and the district itself have sponsored teams since the 2008-2009 school year, and thi: is the third time a team from Forsyth County has received an invitation to the national finals. Most of the members are multi-year veterans of the competition, and many of them began competing in TARC in middle school.
West Forsyth’s team is competing for $60,000 in scholarships and prizes, as well as bragging rights for earning the national title. The winning team will travel to the Farnborough International Air Show in England this July to launch against students from the United Kingdom and France in an international rocketry contest.
Sponsored by the Aerospace Industries Association, the National Association of Rocketry and many aerospace industry partners, TARC aims to bolster U.S. student engagement with science, technology, engineering, and math [STEM]. In a 2010 survey among competition alumni, approximately 80 percent of respondents said they planned to pursue a STEM-focused college major.
“TARC is an excellent way for kids to apply some of the concepts they are studying in the classroom to a real project and challenges them to understand the physics behind how the rocket behaves. As they go through design, construction, and testing they experience many of the pitfalls I’ve seen with more complicated projects at large companies. This requires creative problem solving by the team, and along the way they have a lot of fun,” said the team’s mentor, Tom McGuire, who is also president of a local mechanical engineering and fabrication company.