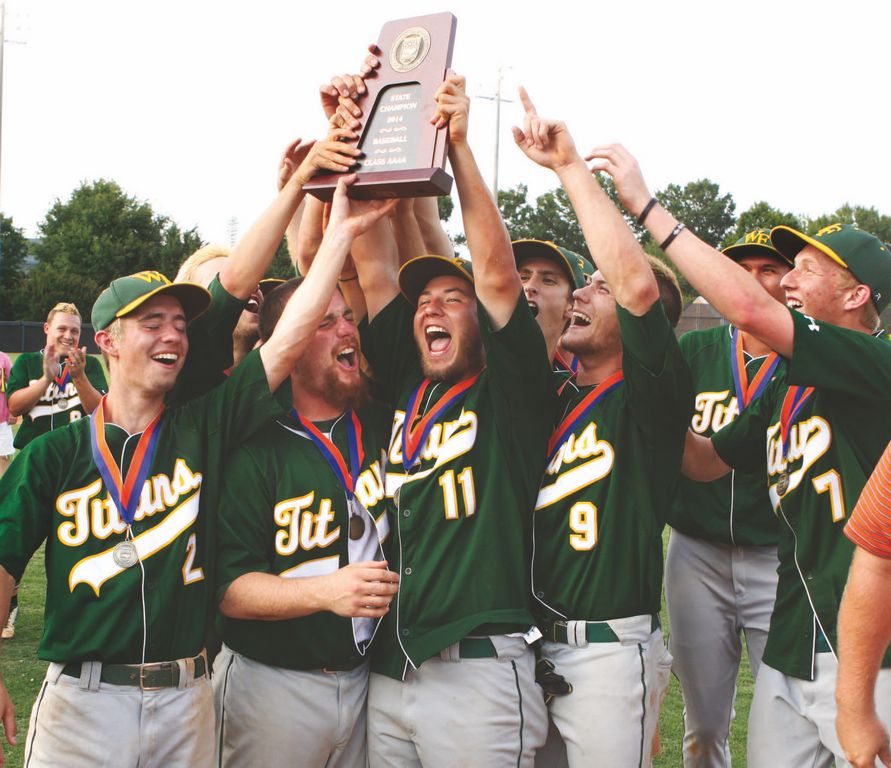 “West – is – the – best.”
Really.
For the first time in 50 years, a West Forsyth boys sports team can make that claim — and mean it.
Matched against Richmond County in a best-of-three series for the NCHSAA 4-A high school baseball title, West captured a 6-4 win in Game 1 and a 6-3 victory in Game 3 to earn the 2014 state championship.
The victories gave West a final win total of 29 for the season – a new school record.
“It’s been an incredible year, no question about it,” mentioned Tripp Shelton, a senior shortstop who provided a three-run home run in West’s series-clinching triumph. “We came into the season knowing we had a very good team. We had the best pitching staff around and we also had experience. But to get this far feels pretty special.”
The Titans capped off an amazing post season run by winning two of three in the state championship series. Strong pitching and defense in Game 1 and Game 3 provided the foundation for the two Titan victories. Senior leadership also played a role in West’s success.
There were 11 seniors on this year’s team.
“I’m proud of them — they were a team in every sense of the word,” noted West first-year head coach Brad Bullard,

referring to his 20-man roster. “They were always there for each other and they battled all season.”
Senior pitcher Travis Holden provided a great example of West’s refusal to yield in the face of adversity. After struggling on the mound in an 8-7 Game 2 loss, he rallied in Game 3 — recording the final seven outs to pick up the save.
“Between games, I just regrouped and got myself together,” he said afterwards. “I’m just glad coach Bullard gave me another chance. Jake (Mayhew, West’s starting pitcher in Game 3) threw a great game and I was glad I could help out.”
Catcher Zach French also exemplified the team spirit this spring. After losing his father, Andrew, to a fatal heart attack early in the season, Zach did what his dad would have wanted — he continued to be a reliable teammate.
“He loved this team and I know he’s up there enjoying all of this,” he said afterwards. “I’m just so thankful to have these amazing teammates.”