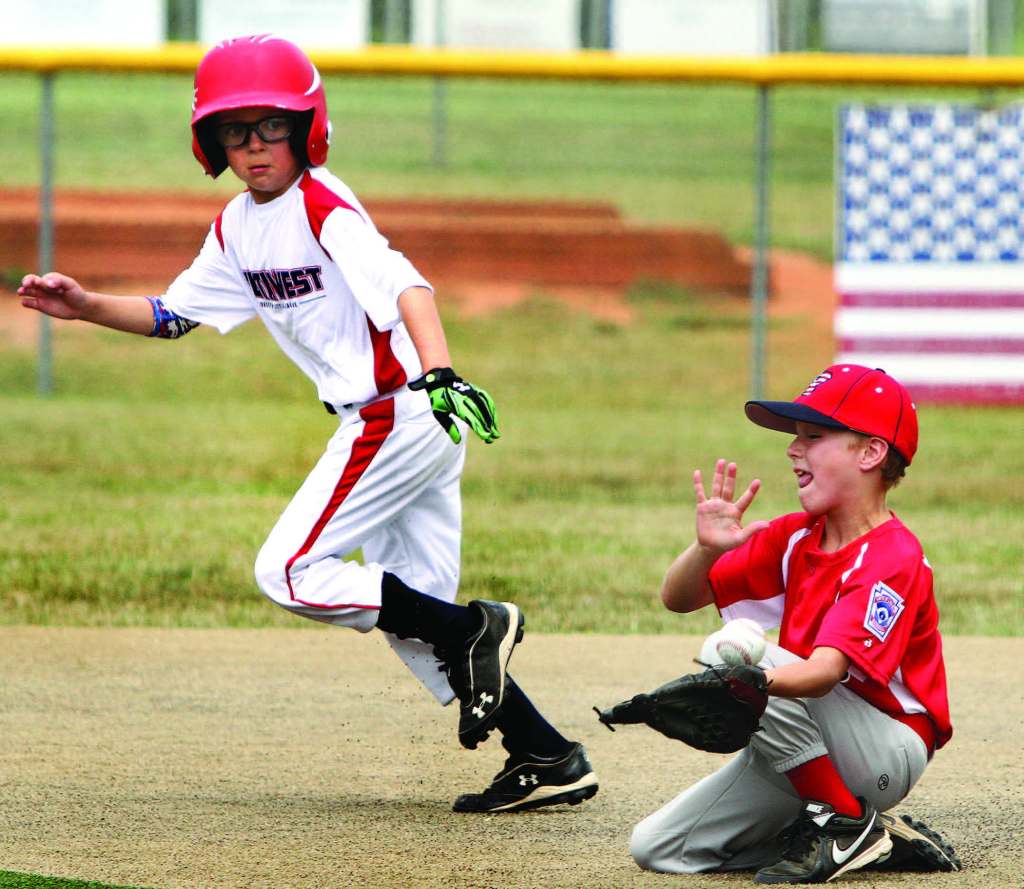 Southwest Forsyth runner Andrew Elko takes an extra base as a Rowan fielder struggles to corral the ball in last weekend’s Tournament of Champions 8U Little League baseball play. Southwest won this game and then won for a second time on Sunday afternoon. They will continue district play on Friday.

Wins were abundant for the Southwest Forsyth Little League last weekend as all-star and Tournament of Champions baseball and softball play got underway.
The Southwest 7U and 8U TOC baseball teams both got off to fast starts by winning a combined total of five games in two days.
In 7U play, manager Brad Bovender lauded the stamina of his group of 6 and 7-year olds as they played two doubleheaders in 90-plus degree heat.
On Saturday, Southwest swept East Surry by scores of 15-7 and 14-4. They added a third win on Sunday with a 6-5 triumph over Kernersville. Later in the day, Kernersville bounced back to edge Southwest 14-12 in the final game of pool play.
By virtue of the tie-breaker system, Southwest claimed first place in their division and will now be a top seed heading into this weekend’s championship round.
“These 6 and 7-year olds played back-to-back days and both days were doubleheaders,” Bovender noted afterwards. “That’s a lot for anyone, let alone kids this age. But they played about as well as they could have. I’m proud of them.”
Bovender pointed to the team’s defensive play as the primary reason for their first-place finish.
“Defense is so big at this level, as the tie-breaker is runs allowed,” he explained. “After two days of pool play, the top spot did come down to the tie-breaker, and the defense these boys played gave us first place.”
The 7U championship game is set for this Saturday at noon at the SWFLL complex. Southwest will meet the winner of East Surry and Kernersville.
• The SWF 8U baseball team recorded a 10-run win in its opener when Micah Welborn slugged a two-run homer in the fourth inning. One day later, manager Jason Culler’s team notched a victory over Northwest Forsyth.
Southwest will continue its quest for a district title with a game this Friday at the SWFLL complex. The tournament title game will be held at the complex on Sunday at 4 p.m.
• SWF all-star teams in the 9-10 and 11-year old divisions will also get underway this week. The SWF Major division team will open district play at home against the Walkertown-Northwest Forsyth winner on Sunday afternoon.