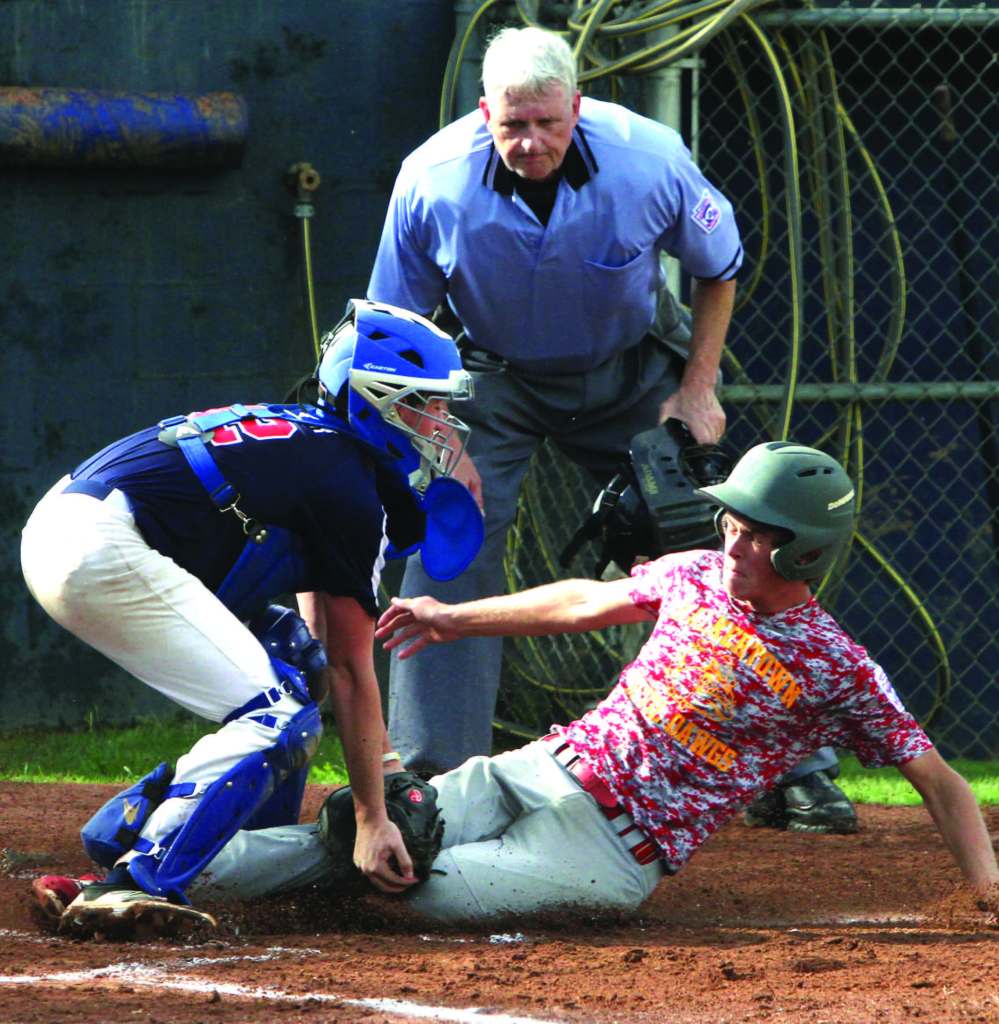 By Chris Mackie
The Clemmons Courier
Building on their successful all-star play in recent years — including 2014 when its Major division boys baseball team won the state title — the Southwest Forsyth Little League has four youth teams involved in state tournament play this month.
Leading the way so far is the 7u team managed by Brad Bovender. The SWF 7’s traveled to Sylva, N.C. over the weekend and finished second in their Tournament of Champions competition. Also competing in state tournament play are the SWF 10/11s, Intermediates (12/13-year olds) and Juniors (13/14-year olds). All three of those tournaments begin this weekend.
In 7u play, Southwest went 3-2 overall and reached the state finals before falling to Hendersonville 11-10. Southwest had pounded Hendersonville 21-12 in pool play.
“These kids fell behind
Southwest Forsyth catcher Shawn Ingram tags out a sliding Walkertown runner during Senior division all-star baseball play.
At left, Brett Berrier looks to turn a double play in Senior division baseball play. Above, SWF pitcher Harrison Vaughan throws out a runner at first base.
Kelli Marshall earns national honor in field hockey
For most, making the varsity field hockey team as an underclassman is a seemingly impossible goal. However, rising junior Kelli Marshall has not only two years of varsity experience under her belt, but is also preparing to stick it to the competition this summer in the 2015 Junior Olympics.
The AAU Junior Olympic Games are the biggest nation wide multi-sport event for young people in the United States. Since its beginning the games have been conducted in 19 states and 30 cities, while growing to encompass
11-4 in the third inning of the championship game and then fought their way back,” Bovender explained later. “The way they came back was great. We had runners in scoring position in the last inning but just weren’t able to push a run across.
“But overall our boys played on another level for 6-7-year olds. The defense is what we tried to make our backbone, as we felt we could outhit anyone. They gave up just eight runs a game at states, which sounds like a lot. But for 6 and 7-year olds, that’s outstanding.”
Southwest Forsyth advanced to the finals by beating Lake Norman 10-8 in an early game on the second day of tournament play.
Hitting leaders the team relied on to move runners around were Sammy Rice, Ben Waldo, Joe Yakos and Brendan Pridgen.
Good plays on defense were turned in by Dylan Grimes, Jacob Prevette, Ben Silver, Colby Bovender and Hampton Hearn.
Bovender also praised the assistant coaching of Matt Fox, Kevin Rice and Carl Hearn. “And I want to especially thank our team mom – Lori Waldo,” he concluded. “She was amazing.”