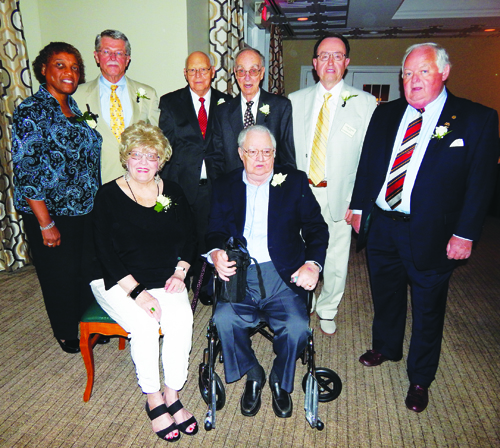 The fledgling Lewisville Civic Club encounterd a horrible problem in 1945 shortly after the club organized. The club had been raising money to build a gym at the Lewisville School, grades 1-12. The school burned. Instead of a gym, the community suddenly needed a new school. The club members switched their attention to pressure the county school superintendent to build a new school. “That was one of the first things we did,” recalled club president Larry Morris. That was one of a laundry list of accomplishments cited over the weekend when the club celebrated its 70th anniversary at Salem Glen Country Club. “We wanted to make Lewisville a better place to live for all the community members,” Morris said. Club members helped organize the fire department, gave $20,000 to build the library, contributed $50,000 to build Shallowford Square. The club led the effort to incorporate Lewisville. It established the Boy Scouts and Girl Scouts and continues to pay the charter dues for the Boy Scouts. Club members pay for girls to attend camp. The club helped build the G. Galloway Reynolds Center. And three high school graduates receive club scholarships each spring. The club has been creative in its fund-raising efforts. It used to sponsor a penny-a-vote campaign for mayor before incorporation. Morris recalled meeting the mayor, his postman John Craft, when he moved to Lewisville 37 years ago. “That was a big thing back then,” he said. “That was my first memory of moving to Lewisville. The club has sponsored softball leagues and horse shows in the past. It now sponsors a Christmas Parade, which Morris notes is the largest in the county. “We throw out more candy than any other parade in the county,” he said. “We’re proud of it and for all the things we’ve done over 70 years.” Forsyth County commissioner Dave Plyer was guest speaker for the anniversary party. Mike Horn served as master of ceremonies. Eight past presidents were also recognized. One of them, Jerry Farmer, also spoke about the accomplishments of the club.