Sheldon Cooper- Laney: After tripping in his first race, West hurdler has run for scholarship 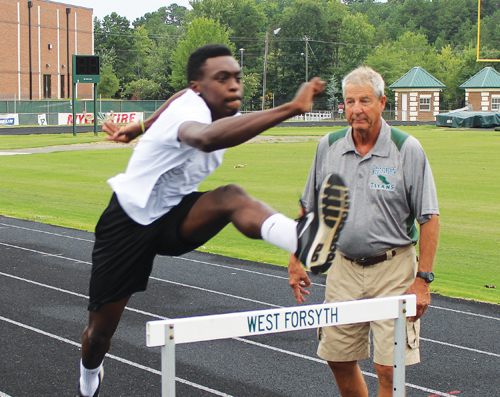 It is never too late to trying something new. For Sheldon Cooper-Laney, he decided to branch out and run track his junior year at West Forsyth High School. “I saw it and I wanted to try it. I wasn’t very good,” Cooper-Laney laughs. “I had friends who were better than me, but I wanted to be the best out there. That made me want to work harder.” Cooper-Laney, who has a twin and five younger siblings, began to dedicate his ambition to becoming a hurdler. Instead of settling for being less than average, he began to run more, lift weights, and enhance his technique. The person who noticed his determination and natural ability was Coach Chuck Lott. Coach Lott began to volunteer for the track team by default. While picking up his grandson from practice everyday, he found himself bored and wanting to help. “I ran hurdles at Wake Forest. I knew the track coach at West, Jeff Thompson, and I asked if I could do something.” Coach Thompson put Coach Lott in charge of the hurdlers. That’s when Coach Lott noticed Cooper-Laney. “Hurdlers need speed and upper body strength because it drives the legs. Then if you have size, like Sheldon does, you have all the tools to be good.” Cooper-Laney began to train in earnest with Coach Lott. “I remember his first meet at Mt. Tabor. He got three steps to the last hurdle, then he fell and tripped. But he still got up and had a darn good time. I thought this kid is going places. He had to get track spikes online because his feet are so big.” Cooper-Laney kept working hard. By his senior year, he was a cut above the rest. His mom and dad were impressed. “At first, they didn’t know how good I was becoming. They saw and were amazed. They kept thanking Coach Lott for how much he had coached me,” notes Cooper-Laney. The coaching helped. The new hurdler kept setting personal records in each race. He medaled in the City Meet getting third place in the 110 meter hurdles. He qualified for the Conference meet and got 4th in the 110 meter hurdles and second in the 300 meter hurdles. As a result, he qualified for Regionals. There, Cooper-Laney competed against about 100 other hurdlers where he was able to clinch a 5th place in the 110 hurdles. After doing so well so late in the game, Cooper-Laney did not anticipate going to college. In fact, he was not even sure if college was something attainable in his future. But Coach Lott saw Cooper-Laney’s potential once again and asked the student if he wanted to take his talent to the next level. “We knew he was an academically gifted student and the potential for him to be better in track was there. So he’s a nice package,” says Coach Lott. “Coach Lott asked me if I wanted to pursue a career in track. He presented me with schools that had track and field programs. I contacted them and presented them with my times. A few schools contacted me back,” says Cooper-Laney. “Unless schools have their eye on you, you have to be proactive,” says Coach Lott. “He wasn’t college material for the hurdles until his senior year. I can still remember him running across the football field and saying, ‘Coach, I’m going to college!’” Pfeiffer University liked Cooper-Laney’s times and offered him a scholarship. As a result, Cooper-Laney will be attending in the fall. Coach Lott is proud, but not surprised. “He’s just a good kid. The other kids look up to him.” Cooper-Laney could have given up his junior year when he quite literally stumbled and fell his way through the first race. Instead, he kept trying, pushing himself again and again. As a result, he found Coach Lott someone who believed in him. Our young neighbor’s determination likens to the quote by Vince Lombardi, “The measure of who we are is what we do with what we have.” “Your Neighbor” is a feature by Jill Osborn. If you have a neighbor everybody should know, reach Jill at jill.n.osborn@gmail.com. Also follow her blog on parenting at MuchAdoAboutMothering.com/