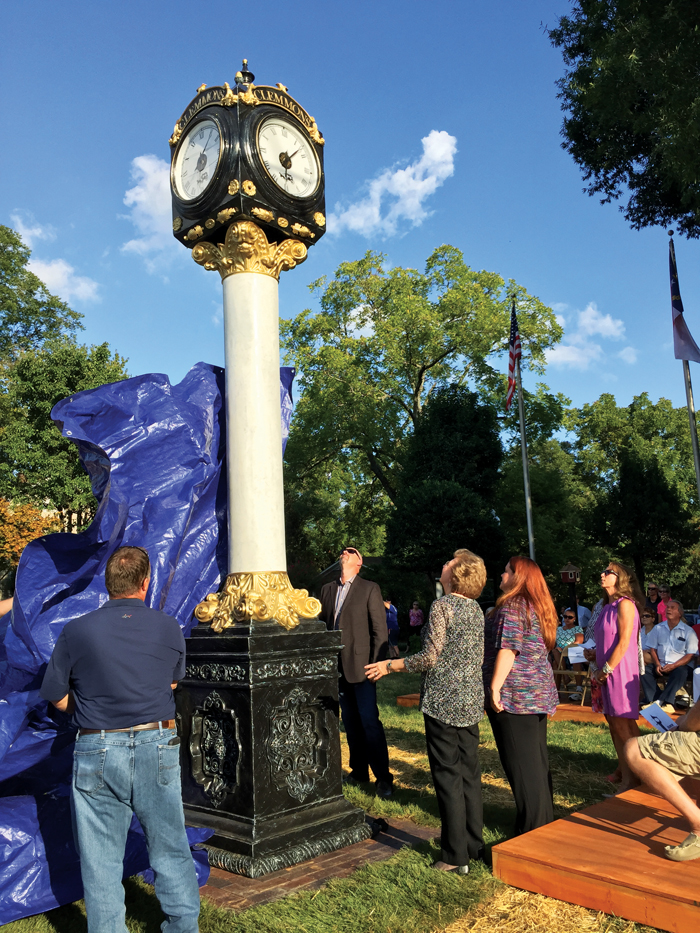 As the blue canvas was pulled away Monday evening, the D.C. Lawrence family gathered close to see the memorial clock outside the Clemmons village hall. — Photo by Dwight Sparks

There’s no place like home, and for Sue and D.C. Lawrence, it was Clemmons.

Even though they grew up in Davie County and eventually moved to Bermuda Run, Clemmons was always home – a place where they made a living and raised their family.

So when D.C., a prominent builder in the community, passed away in April – just six months after son Don died – the Lawrences decided they wanted to do something to give back to a place that was always so special to them.

“I have another son, Danny, and he said, ‘Mom, I think we ought to do something in Clemmons in memory of Dad and Don,” Sue said. “And I agreed. So Danny went to talk with Larry Kirby (the Village manager), who is a good friend of his, and Larry suggested several things. And then he came up with the idea of the clock, and we both thought that was a wonderful thing for the town of Clemmons.”

On Monday night, Clemmons had a public dedication ceremony in front of Village Hall on U.S. 158 where the striking 16-foot-clock was unveiled with Sue and Danny in attendance along with members of the Village Council and others.

Kirby said he had visited with D.C. in the Hospice Home and then talked with the family about some possibilities of what they could do. “We talked about a lot of options, like doing monuments in front of businesses he owned and other things,” Kirby said. “But in the back of my mind, I had thought about the clock because before his passing, Chris Jones, one of our council members, had always wanted to have a town clock. So I presented that item to them. They asked me to review it and find some companies.”

The final result was a towering four-sided, Swiss-made digital clock, which weighs about 1,400 pounds. The face of the clock, which is black, features the Clemmons carriage logo and is lit. All four sides have the name Clemmons embossed in gold. “The center between the head and base of the clock appears to be marble, but it is cast aluminum,” Kirby said. “It is very impressive. It looks like something that would be in Great Britain.”

Kirby said that the Lawrences bought the clock and took care of all the costs associated with the moving, assembly and installation. The final tab came to about $24,000.

“The family paid for everything,” Kirby said. D.C. was born in Ashe County and Sue in Forsyth County before they moved to Davie and met each other as youngsters. They were childhood sweethearts, graduated from Farmington High School and married at age 18. They landed in Clemmons where D.C. began in the building business and attained his license as a general contractor.

Among his many projects were Clemmons Village Shopping Center, Clemmons Village Apartments, Village Inn and Conference Center (formerly Ramada Inn and Windjammer), an addition to Clemmons First Baptist Church (where they were members) and numerous residential subdivisions.