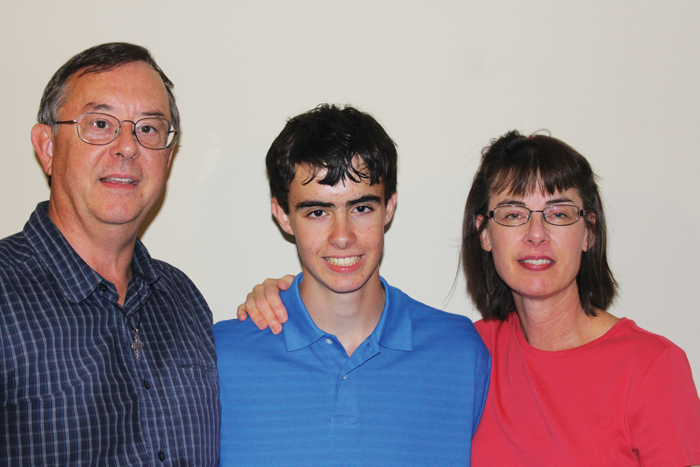 Turn to Page 69 of Guinness World Records 2016 and you find Mount Tabor student William Orrell. Orrell, a junior who also takes classes at the Career Center, got there by stacking and unstacking plastic cups really fast. In sport stacking – also known as cup stacking or speed stacking – he holds the world record in a sequence called the Cycle, which uses 12 cups to create a series of stacks. Before learning more about his story, please watch a video of him in action. It won’t take long. His world record is 5 seconds flat.

Here you go: World Record Welcome back. Even after you’ve seen it, it’s hard to absorb the fact that his hands can move that fast, isn’t it? There was a time when people thought no one would ever break the 4-minute mile. And there are those who have said no one will ever do the Cycle is less than 5 seconds. Orrell knows otherwise. In practice, he has already done it in 4.683 seconds. One of his goals is to break the 5-second mark in a competition, which will make the time official.

Orrell is such a big deal in the world of sport stacking that a company that makes sport cups approached him about putting out the “William Orrell Signature Model.” After trying out different designs and offering his feedback, they came up with a design that he feels good about having his name on, and, in October, stackers will be able to use his signature cups. His stacking skill has brought lots of media attention. Orrell has been interviewed from Brazil. His relay team is being considered for the television show America’s Got Talent. He has appeared on ESPN several times, once as the No. 1 Play of the Week. He was on an MTV show about sport stacking.

Not that Orrell goes around telling people about all this. His father, Bill, said that, if he didn’t tell people about his son’s accomplishments, few people would know about them. “He is very humble,” Bill Orrell said. “I think he is a sweet boy,” said his mother, Pam. “He’s got a good heart.” “He is very spiritually oriented,” Bill Orrell said. “It all comes from his heart.”

Orrell, who is 16, was 8 when discovered sport stacking. At the time, the family lived in Davie County and sport stacking was one of the activities that the physical education teacher introduced to students at Shady Grove Elementary School in Advance. Orrell liked stacking right away. As his father remembers it, “He came home from school and said, ‘I need some cups.’” They went and bought some red Solo brand cups, and Orrell showed his dad what he could do. “It was amazing to watch,” said Bill Orrell. Soon, the red Solo cups weren’t good enough. They went out and bought some official sport stacking cups, which have holes in the bottom – or top, depending on how you look at it – so that they can move faster through the air. In 2008, Orrell went to his first tournament – a state tournament. The relay team he was on placed first in their age category. In other events, though, he characterized his performance as “pretty bad.”

In 2009, he not only did well in his age category at the state tournament, he also placed second overall in the tournament. “He is intently focused when he is competing,” Bill Orrell said. At the Southeast Regional tournament in 2010, he place first overall. “That put him on the map,” Bill Orrell said. A coach from the World Sport Stacking Association called. Three out of the next four years, he won the regionals again. In 2014 and 2015, he was on the Junior Olympics team. In 2015, he won the world championship. Over time, his bedroom at the family’s home in Clemmons filled up with trophies. This school year, his older sister, Mary Anne, who also stacks a bit, went off to Roanoke College in Virginia, which made it possible to – temporarily, of course – use her bedroom as an annex for some of the overflow.

You don’t need any particular physical attributes to become good at stacking, Orrell said. “Just about anybody can do it.” Being tall can present challenges to becoming a strong competitor because the height of the table is set. Orrell knows of a 7-foot-tall German competitor who has to slide his legs to the side to get down low enough. For the most part, though, it’s a matter of practice, practice, practice.

Although he doesn’t practice as much these days, there was a time when he would practice two or three hours a day. If you keep at it, he said, you eventually reach a place where you don’t think about it, you just do it. As with any skill, there’s also that undefined something that makes some people better than others no matter how much the others practice. Orrell looks on it as a gift. “It’s a God-given talent,” he said.