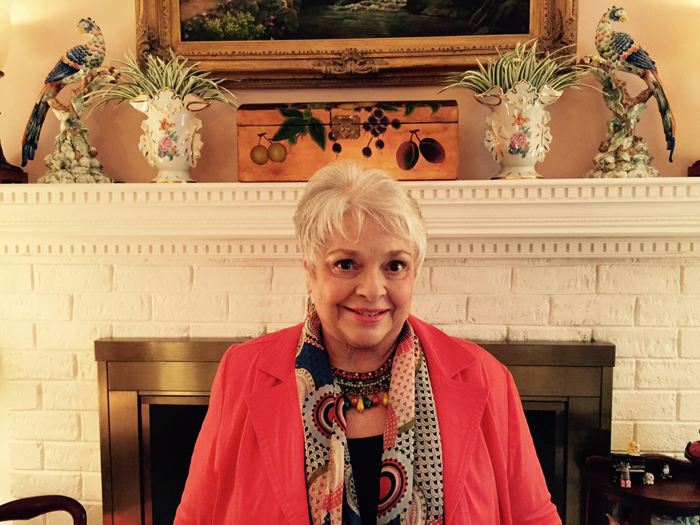 Barbara Edwards and husband Drew moved to Clemmons in 1979.

Anyone who knows Barbara Edwards is likely enchanted by her southern charm. Chances are good, that if you visit her home, you are greeted with an inviting smile and warm cup of tea served with a sweet treat on her fine china. Surprisingly, Barbara was born in Kansas before moving to Greenville, South Carolina, in junior high. “When we first moved, I felt like we had gone to a strange country.”

Growing up a Baptist minister’s daughter, Barbara jokes, “I had to behave a lot.” Barbara was the middle child of 3. Fondly remembering her childhood, Barbara says, “I grew up attending the neighborhood church, it didn’t matter your religion, that’s where you’d go. I walked to school everyday. Everyone did. You knew your neighbors.” Living next to the neighborhood church, Barbara noticed they received a lot of visitors that were homeless and looking for shelter and meals. “I learned from a young age that you never look down on anyone. You should always treat people with the highest respect. I think that was the greatest lesson I ever learned while living with my family,” Barbara recalls.

Barbara also honed in on what seemed to run in the family, a gift for music. Barbara began playing the piano from a young age. Often times, in her home, she would accompany her father on the piano while he played the fiddle for over 3 hours. They could both play their musical instruments by ear. When she would ask her father if he was tired of playing he would retort, “Has it been 3 hours already? I feel like we just started playing.” Barbara’s musical talents got noticed outside of her family. Her senior year, a friend of hers from school asked her to play for him while he tried out for a musical scholarship to Furman University. Barbara gave it some thought and decided she, too, would also try out for one of their musical scholarships. Unfortunately, her friend did not receive a scholarship offer. However, Barbara was given one immediately by Furman University. Barbara was on the fence about whether she should accept the prestigious offer because she was contemplating a career as a physician. Ultimately, Barbara chose to accept the musical scholarship because as she puts it, “I thought it was God’s will for my life. And I think it was.”

Barbara excelled at Furman University. She also had a serendipitous run-in with a man named Drew Edwards her senior year. Drew and Barbara were both taking their respective exams in the same room when it started snowing heavily. After the exam, she says, “I called my Dad and told him that I probably shouldn’t drive home. I was going to stay at my girlfriend’s dorm to be safe.” However, the college students decided they wanted to go see the movie, “The Loved One.” “It was too unsafe to drive miles into town to go home, but not to a movie,” laughs Barbara. “People were piling into cars. I saw Drew all by himself. I had a Volkswagen Karmann Ghia that only seated two people. I told him we could ride together and he hopped right in the car.” Drew and Barbara just clicked. “I had thought he was so much fun. It was the first time I had ever spent alone time with him. We call that the beginning of our romance.”

Barbara and Drew dated for several years. After graduation, they lived in different locations. They made it work through correspondence and frequent visits. Barbara was busy getting her masters in piano performance and winning various distinguished awards. She began teaching at North Greenville University in Tigerville, South Carolina. The school was also paying for her to get her doctorate while she worked at their university teaching piano. Drew was very focused on becoming a doctor, and marriage wasn’t at the forefront of his mind. Ultimately, Barbara let Drew know that she was ready to become more serious and let him know her feelings on the matter. “I told him, ‘You know, I think your career is more important, let’s just be best friends.’ And ironically, that’s when he really got interested. He was more determined than ever to be with me. That did it.” Drew finished his doctorate after they were married.

Drew and Barbara had their daughters, Christina and Stephanie, pretty quickly after they were married. “We were considered older at 26, and decided to have them right away,” remembers Barbara. Barbara had forgone her doctorate to move where Drew was doing his internship at the Duke Medical Center in Durham, North Carolina. Their daughters were born within 2 years of each other.

Once Drew’s program was completed, the Edwards family moved to Richmond, Virginia. It was in Richmond that Barbara really soaked up her love for interior design. “I loved to go to their library and read all their design books. I would read them from cover to cover. It was there that I realized I was having a career crisis. I had 2 little girls ages 2 and 4, who were absolutely adorable. My teaching career didn’t exist anymore and I was teaching privately. I wasn’t happy doing that. My husband said to me, ‘You are a natural interior designer.’ And truthfully, I had been interested in it since I was 3,” recalls Barbara. Barbara’s maternal grandmother had impeccable taste, and inspired her from a young age.

Barbara followed her passion and began making straight A’s in LaSalle College’s interior design program. She took seminars from famous designers throughout the United States, and people began asking her to decorate their homes. She quickly asked to join someone’s design shop. Things fell into place. By 1979, the Edwards family had also made Clemmons home. After falling in love with the area when Drew was in school for his masters at Wake Forest University, Drew called his major professor at school and asked if he knew of any openings in his field (children’s psychology). As luck would have it, there were 3. Drew was extended offers by all 3, but ultimately chose the position of psychology director at Amos Cottage.

Barbara and Drew spent two days viewing over 20 homes before they found “the one” in Clemmons. Originally thinking they would love to live in Winston-Salem, they changed their mind when they found their present house. “Our Realtor had driven us around to so many homes. She didn’t think the one we ended up finding would fit our criteria. Our Realtor, who was a college friend’s mother, stayed in the car while we toured it. We went inside because we thought it looked interesting. I liked that it wasn’t predictable.” And just like that, the Edwards family came to Clemmons to raise their family. They are still one of the original five homeowners in their neighborhood of 37 homeowners. With Drew focusing on his career in children’s psychology, Barbara took care of the girls and maintained her career in interior design. She partnered with another interior designer in town and opened her shop, Barbara Edwards Interiors in Clemmons. These days, Barbara still maintains clients out of her home. She also can be found hosting Gami Days with her granddaughter, Morgan, a student at West Forsyth High School. Ever the gracious hostess, Barbara loves to host tea parties for her granddaughter and her friends, using her good china and silver, fixing cucumber sandwiches, and dressing up — complete with make up and photo shoots while her hydrangeas are in full bloom. She indulges in frequent trips to get pumpkin spice coffee at Starbucks with Morgan and teaches her piano. “I always knew I wanted to be a grandmother,” beams Barbara. “I was so close with my maternal grandmother.”

The family woman has enjoyed every single stage of her daughters’ lives as well. “My family comes first. I still have special days with my daughters, too,” notes Barbara. “I still think of my girls as my babies even though they are 41 and 43.” The family can always be found celebrating holidays at the Edwards’ home.

Barbara’s go-get them attitude is also applied to her extra curricular activities. She participates in water therapy classes 3 times a week at the Jerry Long YMCA. She also is very active in her garden club. Barbara and Drew’s garden boasts trees given to them as gifts from previous neighbors. Barbara has also planted trees for celebratory occasions and milestones. All the trees have names. Their garden is a labor of love that almost looks like a scene out of a movie. Barbara enjoys tending to each and every plant.

The Edwards family is members of St. Paul’s Episcopal Church. Between Drew and Barbara, they have served over 100 years giving their musical talents in the musical choir. According to Barbara, Drew’s tender voice is one of the reasons she fell in love with him when they met in college. Today, Barbara will play for special events and receptions at their church. For her 70th birthday, she held a recital and an overwhelming number of 150 people turned out to hear her play the piano.

‘Clemmons has lost its historian’