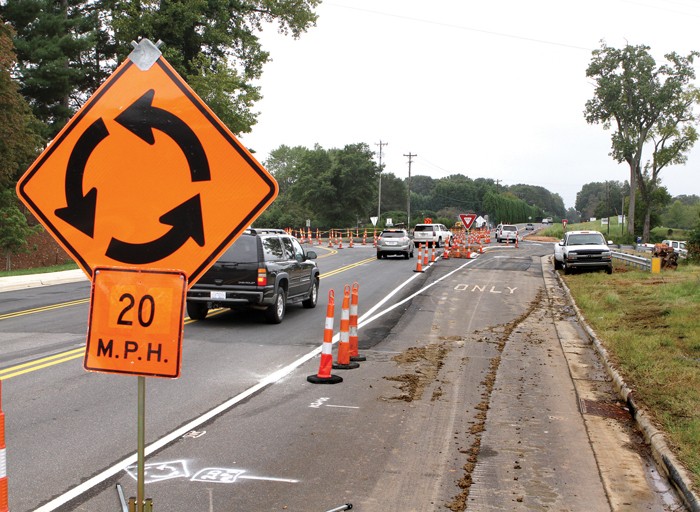 The new roundabout in Bermuda Run is still under construction.

They’re driving around in circles in Bermuda Run, but NASCAR is not in town. The much-anticipated round-about on U.S. 158 just west of the Yadkin River bridge became a reality last week. Traffic immediately backed up to Tanglewood Park as drivers delicately negotiated this novelty. We are in love with roundabouts. Well, some of us are. Lewisville now has three within a half-mile on Shallowford and Williams roads — with yet another in the design phase. Not to be out-done, Clemmons has a dizzy-inducing four on Harper Road, including one behind Morgan School. Now Bermuda Run is grading the Mother of All Roundabouts — a $1.8 million project that is designed to slow traffic. So far, the Bermuda Run circle is doing a great job at that. Traffic was snail-paced as drivers unfamiliar with this very British traffic engineering phenomenon drove with great confusion around traffic cones and tape, construction workers and their equipment. On Monday I watched one driver plow head-long between traffic cones while trying to turn left into Bermuda Run Country Club, ignoring signs and directions to the contrary. Roundabouts are designed for right turns only. Workers flagged the errant driver back onto the circle. On Sunday, I stopped dutifully for a car in the traffic circle to clear. But the very nice lady driving the car stopped to motion me on. It robs me of my manhood to go in front of a lady. She and I eyed each other doubtfully until she continued. British native Robin Dean of Clemmons says we colonists haven’t yet appreciated the joys of roundabouts. North Carolina drivers manuals don’t give instructions about roundabouts because they are still a novelty. Brits use their turn signals to indicate whether they are staying in the circle (left signal) or getting off at the next exit (right signal). Lewisville drivers on Shallowford Road and Harper Road drivers in Clemmons have managed to deal with their roundabouts without much trouble. The Bermuda Run project, however, is on a major thoroughfare. It will have to handle a heavy load of traffic, particularly when there’s a weekend soccer tournament in the Yadkin River bottoms. To make matters even dicier, an obelisk will be erected in the middle of the circle to designate drivers are entering the Town of Bermuda Run. All this traffic circle talk dates back to the late Kent Matthewson. The former planner for the City of Detroit retired to Bermuda Village and began looking around for things to do. His contributions remain the stuff of legend. He helped kick-start the Davie County Foundation. He served as the Town of Lewisville’s first interim manager and convinced them they needed a town square — inspiring the creation of Shallowford Square. He designed his own vision for Bermuda Run that included a huge traffic circle at U.S. 158 and N.C. 801. The new circle missed his dream by a mile. But Bermuda Run may yet decide it needs two of the circles to keep pace with its municipal neighbors to the east. Roundabouts are the rage in Europe. And they are increasingly coming to America. — Dwight Sparks