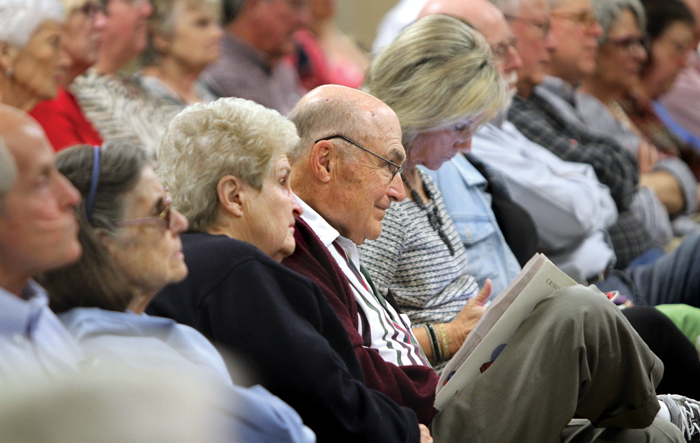 Don’t expect the Village of Clemmons to adopt a bow-hunting season anytime soon to reduce a runaway deep population.

That was the consensus of all the candidates gathered for an election forum last Tuesday night at the Village Inn Event Center.

Mayor Nick Nelson and all seven individuals – incumbents Norman Denny and Bill Lawry, along with challengers Mike Combest, Lanny Farmer, Jack Ingle, Jill Osborn and Chris Wrights – running for three spots on the Clemmons Village Council answered a variety of questions, including one about Bambi and friends. “Have you ever seen a new $45,000 Lexus after it strikes a deer on U.S. 158 near Tanglewood?” came the question from one of the Titan Tattlers representing the Courier staff. “Would you consider – as many municipalities in North Carolina have – adopting an Urban Archery Season as allowed by the N.C. Wildlife Commission for bow-hunters?”

Citing safety concerns, members of the panel overwhelmingly stated their objections over using that method to address thinning out the increasing number of deer. Other topics included soliciting opinions on the job being done by the Sheriff’s Department in Clemmons, seeking grant money for projects such as sidewalks, thoughts on Clemmons as a tourist destination, weighing commercial growth against green space, deciding if a village square was needed, finding a suitable spot for the library and giving each of the candidates a chance to reveal more about themselves. Here’s a sampling of the some of the responses.

There were some differences in the answers, depending on the question, but all were in agreement that Clemmons spending $1.1 million – or about 20 percent of the total annual budget – to finance Forsyth County Sheriff’s Department deputies for Clemmons police protection is money well spent. Jack Ingle, who was in law enforcement himself for 21 years, said that Clemmons was “getting the highest quality service for the best buck. “The Sheriff’s Department does it well and economically. You look at 20 percent and $1.1 million, and you look at other communities, they’re spending anywhere from $3 million to $4 million just on serving police departments or sheriff’s departments.” Mike Combest concurred, saying, “We’ve got it exactly right,” but added that his numbers indicated other towns with a population of about $20,000 pay $5 million to $6 million for comparable service.

Regarding the library, Bill Lawry said, “We’re on track, on schedule to get this job done. We’re going after the best location for the best price – one that is closest and most conveniently located to the downtown of Clemmons. It takes time to investigate, evaluate and decide. We hope to have another site or sites to recommend and a number of also-rans to explain for you very shortly.”

Lanny Farmer said that making such a big decision on where to build a library isn’t one to make in haste. “Buying land is a major deal,” he said. “After all, they’re spending your money and mine as well. Pushing a decision to me is illogical. They should take the right amount of time to investigate all potential properties and to make the right deal. This library is going to be here for 50-plus years. We don’t need to rush it.”

On the subject of whether or not Clemmons is a “tourist destination,” Chris Wrights said, “I don’t think that Clemmons is a big tourist destination. I think with all the problems we see on Lewisville-Clemmons Road and all the congestion, it’s not an ideal scenario. What we most benefit from is the pop-in person stopping to grab something to eat and get some gas. We also have Tanglewood Park and all the recreational activities. “The best way to help (tourism) is to make Lewisville-Clemmons Road better. The best way to do that is the Lewisville-Clemmons Overlay Plan that has been developed, putting in parallel connecting roads to make access to businesses easier and sidewalks in front of the businesses to make it pedestrian-friendly.”

Jill Osborn said, “Government doesn’t bring people here. Events bring people. I think that we need less government. I believe that the businesses rejuvenate our community, so in my opinion I think we should let them do what they do best.”

Norman Denny added that hiring a marketing director earlier this year was a step in the right direction for tourism. “Hiring Shannon Ford helps in this area, and she also markets Clemmons in publications, the website, and people go online and see what’s going on in Clemmons,” he said. “Also, there’s the partnership with businesses and the government when people come here they know where to shop and go.”

Nick Nelson, who is running unopposed for mayor, said that he thought Clemmons was already “wowing people” and used Kripsy Kreme’s decision to build a store on Lewisville-Clemmons Road as an example. “There is a demand for quality names to come to the Village of Clemmons,” he said.