Camping out 3 nights for 1st doughnut 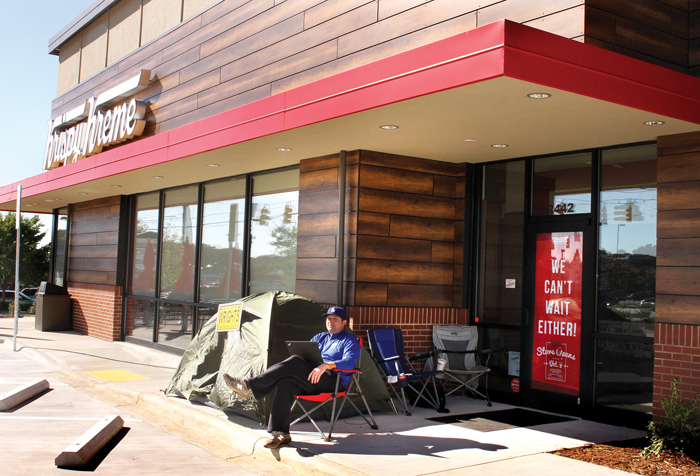 Jason Carter sits by his tent outside the Krispy Kreme store where he plans to sleep three nights awaiting the store’s opening.

By now, Jason Carter knows all about the night life of Clemmons — the loud garbage trucks and their collection schedules, the earth-shaking car mufflers, the traffic on Lewisville-Clemmons Road in the wee hours.

Carter, 39, spent Monday night camped out at the front door of the new Krispy Kreme, determined to be the first customer when the doors open Thursday morning. He said it was a pleasant night Monday until the garbage trucks started making their rounds. His daughter spent the first night with him. His two sons were taking turns the following nights.

The Southwest Forsyth Little League coach, husband and father worked from his computer in a lawn chair during the day. By night, he planned to watch Major League Basebaoo playoff games and dream of doughnuts.

“It was a great night,” he said Tuesday morning. “I think this store is going to be great for Clemmons. I just wanted to be part of it.” He also did a little politicking, mounting a Clemmons village council campaign sign for candidate Chris Wrights on his green tent.

On the store doors were the signs, “We Can’t Wait Either!” The store’s managing partner, John D. Ward of Clemmons, said Krispy Kreme will unveil an entirely new concept when the doors open Thursday morning.

“We’re anticipating a massive turnout,” Ward said. “When we turn on that ‘Hot” light, we’ll see what happens.” Store employees have spent the past week making trial doughtnuts in the cookers and making sure everything is ready to go.

The store will have wifi and a host of computer access points. “We’re hoping people will come and stay longer,” Ward said. Outside his tent, Carter said he was an Eagle Scout and very used to camping with the children.

He said a number of school-related activities are planned at the store, including doughnuts after the Davie County-West Forsyth High football game on Friday night. “They’re a good community partner,” he said of Krispy Kreme. “It’s going to be super.”

Meanwhile, he’s got to deal with the noise and traffic along the village’s busiest highway. As the first customer in line, Carter will be awarded a free dozen doughnuts every week for a year and have the honor of turning on the company’s signature “Hot Doughnuts Now” sign to open the store.
The first 100 customers also will receive a dozen free glazed doughnuts every week for a year.