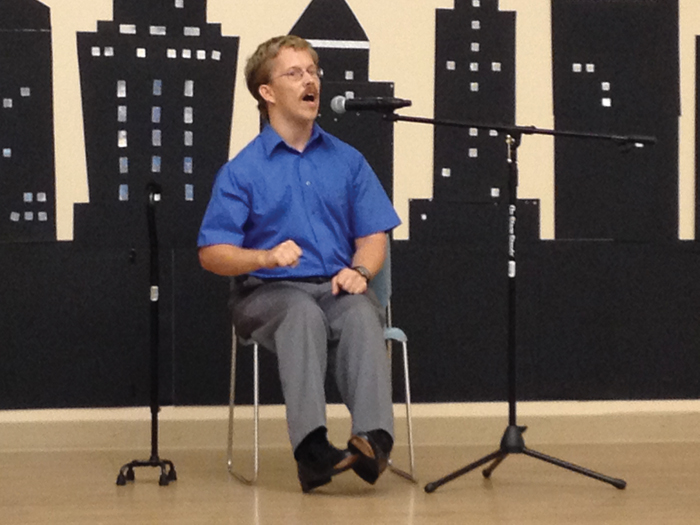 Corey Walker spent his formative years in Bristol, Tennessee. The youngest of 4 children, Corey notes, “Being part of a large family had both good and bad points. However, there was plenty of love to share amongst us.”

Due to complications at birth, Corey was diagnosed as physically disabled at the young age of 2. That challenge did not hamper his spirit or his passion for music. “I’ve loved music all of my life. I can remember a time when I was 3 or 4 and I shared a room with my brother who was 7 years older than me. Whenever my brother was busy, I would use his huge stereo system. It played 8 track tapes and had a turntable in it. The speakers were almost taller than me.” Corey recalls with nostalgia, “I would lay down on the floor in front of the speakers and fall asleep listening to the music. Some of my favorites included Sammy Davis.”

It wasn’t until Corey was a little bit older that he realized he had an ear for harmony. He first put his talents to use in the children’s choir at the church he was attending. He enjoyed singing with his peers every Sunday. Corey spent 2 semesters of college at Middle Tennessee State. “I realized I wasn’t the right fit for school at the time,” Corey chuckles. “So I decided to follow Mom and Dad to North Carolina.” Corey was hopeful high education pursuits would be different when he begun taking courses at Forsyth Technical Community College focusing on radio and television. “Life had a different plan for me at that time,” remembers Corey. “As much as I don’t like focusing on my disability, I couldn’t ignore that I had to have surgery. I made the decision at that time, I was not right for school at that juncture in my life.”

During the same time, Corey had also been working for Harris Teeter located by Tanglewood in Clemmons. “I meet a lot of interesting people,” smiles Corey. “I can’t have a job that requires me to sit at a desk all day and do paperwork. I enjoy the contact and interaction with people.” Corey enjoys particularly the positivity from his senior customers in particular. “I get a lot of shoppers from Bermuda Commons. They don’t come in because they have to — they come in because they want something a little extra. They have worked hard to earn what they get. They seem to understand that the service industry can be a challenging thing to do at time. They always have a smile on their faces.”

When the Tennessee native relocated to North Carolina, he had sidelined his musical talents. “I had stepped away from music because I had no outlet for it,” he muses. “It wasn’t until a little over a year ago that I decided to audition at Hanes Mall. I was trying out to sing the National Anthem at one of the Winston-Salem Dash baseball games. I was selected to do it.” It helped reignite Corey’s passion for music, in particular, singing. Corey began to really put time into his musical craft. He sought out a voice instructor who has served as a mentor and coach. “Part of the deal with working with a voice instructor is, you practice. However, they also help you find your next step with your career,” informs Corey.

Corey’s voice coach has performed at Carnegie Hall in New York City. “She has really pushed me to better myself,” says a grateful Corey. Corey has kept his coach on her toes as well. “She thought my talents were more in the classical department. And I considered myself more of a modern alternative type. I consider myself all over the spectrum. I like anywhere from Johann Sebastian Bach to Twisted Sister,” quipped Corey. Corey hopes to one day record an album. “I’d love to find a way for my voice training to pay off,” remarks Corey. “It would be really cool to get into the recording studio and redo some of the classics,” he says hopefully.

Until that opportunity comes, local friends and neighbors can ask Corey when he plans to have his next voice-training recital, so they too can enjoy his talent.

Our neighbor strongly agrees with advice I often got from my grandfather, “Choose a job you love, and you will never have to work a day in your life.”