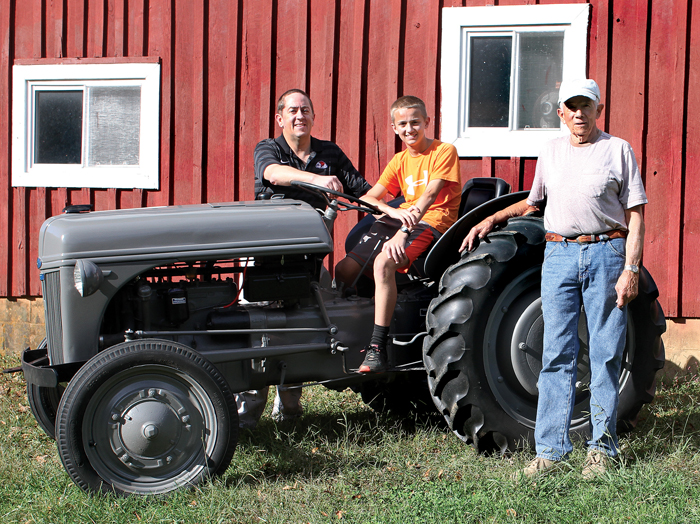 Purchased in 1946, this carefully restored Ford Ferguson tractor has served five generations of the Sheek family. Above are the third, fourth and fifth generations to operate the tractor, from left, Alex Sheek, John Sheek and Dick Sheek.

Just over 70 years ago, and after the family’s mule died, Frank Sheek bought a new 1946 Ford Ferguson tractor in Mocksville to help tend the fields of his 126-acre Davie County farm.

The $1,500 sale included a plow, disk harrow, two-row corn planter, cultivator, tiller tool and wood saw and small trailer. The tractor has been in continuous use, since it was bought, by five generations of the family. The only implement saved is the disk harrow.

Over the past couple of months, Frank Sheek’s grandson, Dick Sheek; his great-grandson, Alex Sheek and great-great grandson, chose to restore the old tractor back to the original state and color. “When the tractor was bought in August 1945, Papa Sheek, was more used to walking behind a mule, and did not want to drive it, so his son Gray and me took over the farming tasks with the new tractor,” said grandson Dick Sheek. He added, “During the day time, my Dad was working at Reynolds, and Papa assigned me the chore of driving the tractor to plow and cultivate the fields.

At the end of that school year, when report cards came out, I had flunked the sixth grade. My Mom rushed to the school to find out how that could happen. Turns out I had missed over 35 days of school and that was cause for flunking. Next year I didn’t drive that tractor during school hours!” Sheek continued, “The old tractor was used for farming from 1945 to 1954.

Papa finally learned to drive it when he was 70 years old. My Dad used the tractor to plow and cultivate a small garden. In 1975 Dad asked each of his seven children what they wanted from the home place, I got the tractor, and brought it to my farm here in Clemmons. My sons learned to drive the tractor when we were gardening, bush hogging, pulling vehicles out of the snow or mud and hauling trailers of firewood.” “Awhile back, my son, Alex and 12-year old grandson John, both classic car enthusiasts, wanted to clean up and restore the tractor, said Sheek.

“Alex knew how to do body work, having learned this skill when he was a teenager, working part-time for Paul Hill’s Body Shop.” Alex said “It’s a hobby and something I enjoy doing, but my career is computer research, which brings home the bacon.” “We took apart the tractor parts and John helped me clean off 70 years of dirt and grime with pressure washing and we washed it down with paint thinner. We replaced the worn out parts, like gaskets, gauges, nuts, bolts, insignia and radiator cap,” said Dick. “Alex took out the dents and dings off the hood and fenders, which was a time-consuming job.

Working on old cars and this tractor translates that he is somewhat a perfectionist and wanted the tractor to look just like it did coming off the showroom floor, with the exact color of gray. My Dad had once painted it to have a red belly, but that wasn’t what it was new.” Alex said, “What we did on the tractor was all cosmetic. I used hammers and a dolly to remove the dents, then it took a lot of sanding and painting to finish. There was no rust. We didn’t want to quit until we finished. It took us about eight weeks, and I would work in the evenings.

Dad worked almost every day for two or three hours. It was a great family project.” Dick continued , saying “We had to order some parts from a Ford restoration plant in Concord, including the insignia on the front of the tractor. Bolts, screws and gaskets and a tube for the back tire were replaced.

After all was finished, it took some time to fit all the parts back. She cranked right up when all was finished.” “Guess I spent about $600 on all the parts and paint,, but she shines like a new one,” said Sheek. “I have decided this tractor won’t be residing in its usual spot in one of my open front sheds, It has a special place on the concrete floor of my barn, with a secure pull down door, so it will be protected from the elements.” “Alex will inherit the tractor, and then John, as the fourth and fifth generations.

My granddaughters wouldn’t be interested in this part of family history,” said Dick. “John’s goal is to enter this five-generation tractor in tractor shows, but that has not been decided yet,” said Dick.