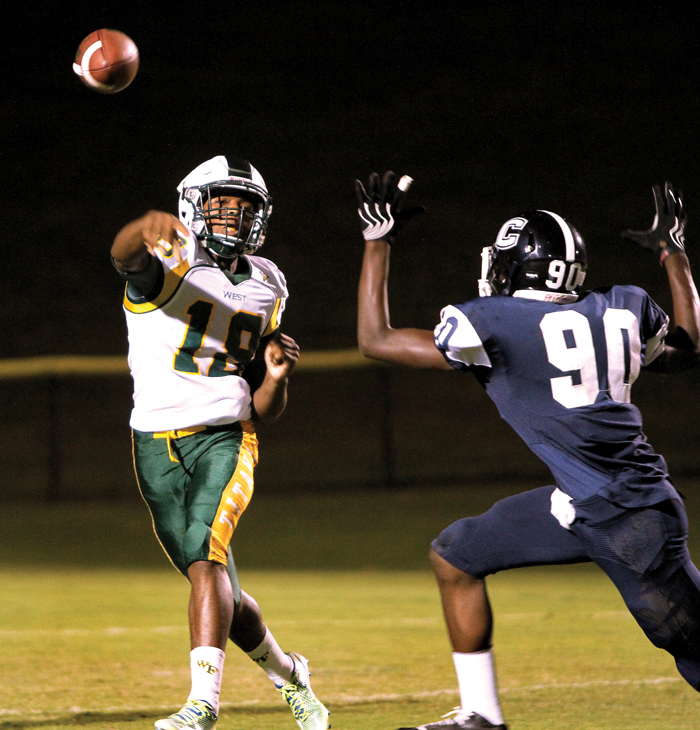 West QB/WR Darion Slade will play a key role in Friday’s game against Reagan. Both teams feature high-powered offenses. West is averaging 35 points per game while Reagan is averaging 46.

It has taken nine long weeks to get here. But the football game everyone in western Forsyth county wants to see — the one where rival high schools from two local communities meet to determine first place in the current conference standings ­— is finally here.

This Friday night West Forsyth will host Reagan in a showdown between the only two teams still unbeaten in Central Piedmont Conference play. Tied for first in CPC For the Reagan Raiders (7-2, 4-0), a case of deja vu would be nice, one where they repeat last year’s visit to West that ended in a 13-12 Raider victory. The win spoiled West’s perfect 8-0 start and helped propel Reagan to the first CPC football title in their nine-year school history. For the Titans (6-2, 3-0), the need to avenge that loss and end a two-game home losing streak to the Raiders (Reagan also beat the Titans in Clemmons in 2012), is paramount.

A loss would almost certainly eliminate their hopes of winning the CPC title. “Considering everything that’s at stake, this is the biggest game of the year – no doubt about it,” mentioned West head coach Adrian Snow, after his team knocked off Mount Tabor 24-14 in last week’s CPC play. “The rivalry is big because the families and kids from both schools know each other well. Bragging rights are on the line too.

And for the two teams, the goal is to stay on track for the conference championship. The winner of this game will be one step closer to making that happen.” Josh McGee, Reagan’s fifth-year coach who played and coached at West, agreed. “Sure, it’s a big game because of the rivalry,” he said. “But more importantly, it is a chance to take over the driver’s seat in the conference standings.

The winner of this game will control their own destiny for the rest of the regular season.” West beats Tabor While Reagan coasted into the showdown by pounding Parkland 67-20 last week, the Titans had to battle past Tabor in a game that wasn’t decided until the fourth quarter. Caldwell headlines West win Running back and return specialist Marcus Caldwell played a pivotal role in West’s sixth win of the year.

The Titan sophomore returned a punt 70 yards for a score in the first quarter and then rushed into the end zone from 20 yards out in the second quarter. West quarterback Jayshawn McMillian added to the scoring by getting West on the board with a one-yard TD in the first period. Titan kicker Matt Harkey tacked on the only points of the second half with a 29-yard field goal in the fourth quarter.

On defense, the Titans delivered several big plays in the second half to seal the win. With his team ahead 21-14 in the third quarter, defensive back JaQuan McMillian forced a fumble inside of the West 15-yard line that was recovered at the six by teammate Tyki Lawson-Oates. The strip by McMillian came after a long Spartan pass play. In the closing minutes of the fourth quarter, sacks by K.J. Henry and Baer Hunter killed Tabor’s final drive of the night.

Snow said he was pleased to see West produce in all three phases of the game. “Offense, defense and special teams ­— they all contributed in this one,” he noted. “I was especially pleased with our defensive play in the second half.” Defenses face stiff challenge Playing strong defense will be a major goal for both West and Reagan this Friday night. Both teams are explosive offensively. The Raiders average an eye-popping total of 46 points per game and have scored 35 or more points in all nine of their contests.

West averages just over 35 per game and has scored at least 21 in each game. “Defensively, find number 18 (West multi-purpose threat Darion Slade). We have to know where he is at all times,” McGee said. “And 17 and 2 (Caldwell and Darriel Brown respectively) are dangerous too. We have to play our keys on defense. They have a number of weapons over there.” Snow said the same about the Raiders. “They have a very efficient offense and you can’t really stop them – you just hope to slow them down,” he added. “But at the end of the day, you have to tackle well. Do that and you have a chance.”