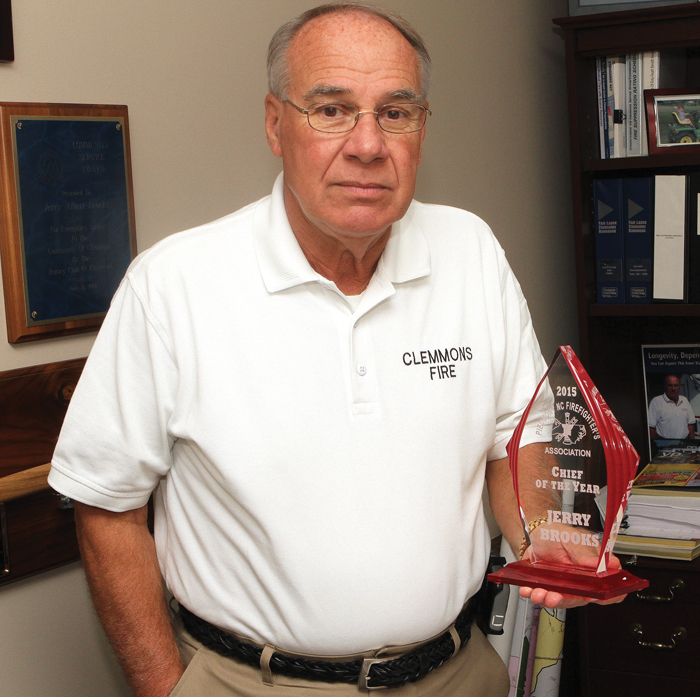 Clemmons fire chief Jerry Brooks has been named the piedmont regional Fire Chief of the Year.

“Who told you?” Clemmons fire chief Jerry Brooks quizzed when a reporter and photographer appeared at the fire station.

He had placed the award on his shelf behind his desk and kept it quiet until Mayor Nick Nelson spotted it last week and asked the obvious question. “What’s this?”

Brooks, who started as a volunteer fireman in Clemmons in 1971 and has served as chief for the past 36 years, has been named the Piedmont North Carolina Firefighters Association Chief of the Year. The Piedmont region includes the area from Interstate 77 east to Wake County and includes about 300 fire departments and 19,000 fire fighters.

“It’s quite an honor,”Brooks said. “I just say thank you and go on with my job.” The regional winners will be considered for the state firefighter’s award later.

After being badgered into posing for a photo Tuesday, Brooks returned the plaque to its place on the shelf and turned his attention to something else that he’s more comfortable talking about — like that rainy NFL football game Monday night in Charlotte.