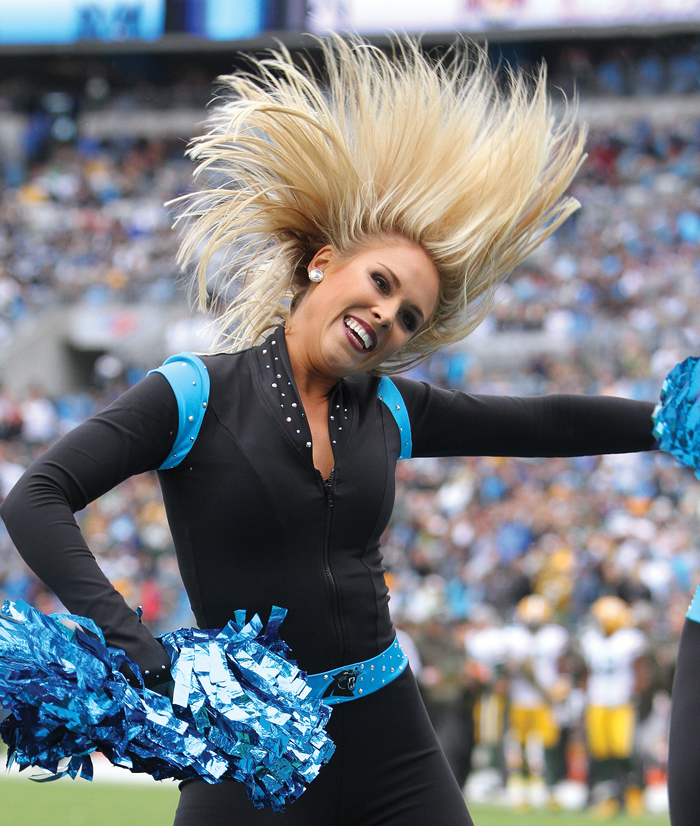 West Forsyth High homecoming queen Kloi Irving has claimed a spot on the Carolina Panthers Top Cat cheer squad this season. This picture is from the Green Bay Packers game.

She graduated from college and has become a cheerleader for the Carolina Panthers. Last week, she flashed a big smile through a heavy rain during the Panthers game with the Indianapolis Colts at Charlotte. She danced and cheered through the rain with the other members of the Top Cats squad.

On Sunday, she repeated the process in drier weather as the Panthers beat the Green Bay Packers to run their record to 8-0 “She told me she felt like a wet dog,” said her grandmother, Judy Howard of Advance, after the Colts game.

Kloi had planned to be a math teacher after graduating from UNC-Charlotte, but the Top Cat position had a certain lure she had to pursue. She tried out a year ago and made it to the final 35 spots before being cut. This year she made it. “She has been dancing ever since she was 3,” said her grandmother. “She wanted to do this. She wanted to see if she could make the team. I’m proud of her. She has done well.”

Her mother, Sherry Howard Crawford of Clemmons, also weathered the heavy rainfall from the stands. “I was there in the rain. It was the most fun and the most miserable experience of my life.”